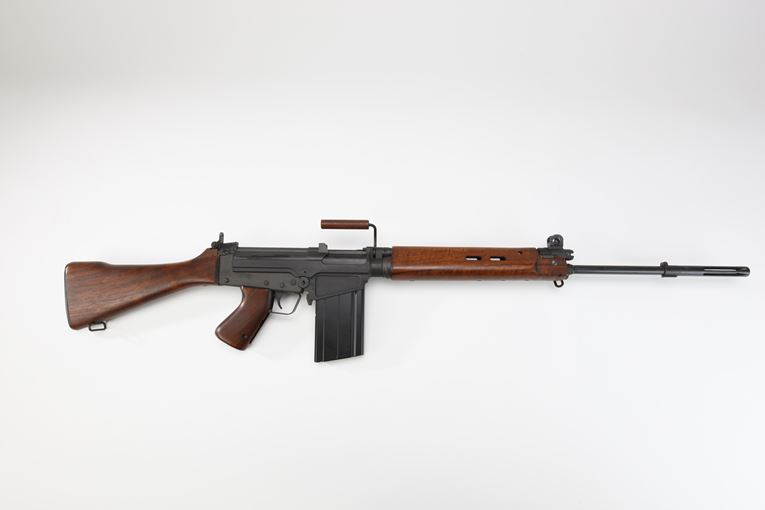 One of the 1950s period competitors for selection as the next US military rifle was this H&R T48 experimental model of the Belgian FN-FAL rifle. SN 4142


The FN FAL light automatic rifle is one of the most widely-used military arms in the world. Chambered for the 7.62mm NATO cartridge, these gas-operated selective fire rifles employ a box magazine with a capacity of 20 rounds. Although most commonly used as a semi-automatic rifle, their cyclic rate is approximately 650 rounds per minute in fully automatic mode. The FAL has been adopted by nations in Europe, Africa, Central and South America, and Asia, as well as Canada and Australia.

In addition, 500 examples were manufactured in the United States by Harrington & Richardson and designated the T48 rifle. These were submitted for use in extensive testing by the U.S. Army as a potential replacement for the M1 Garand prior to the Army's eventual adoption of the M14 rifle. A handle is provided on the left side of the receiver for cocking the rifle and loading a round into the chamber. When firing, this handle does not continue to move. The bolt remains open after the last round is fired, and insertion of a fresh magazine, coupled with a stroke of the cocking handle readies the rifle for use.

The FAL fires from a closed bolt, and depressing the trigger releases only the hammer and firing pin without the potential of disturbing the shooter's aim, as is the case with rifles that fire from an open bolt. A selector switch on the left side of the receiver may be set for "safe", "single shot", and "full automatic". When the rifle is fired, the gas system causes the bolt to open and compresses the return spring in the rifle's buttstock during recoil. The spring then returns the bolt to the closed position to complete the firing cycle. Feeding and extraction is performed in the same manner as that used in other semi- and fully-automatic small arms. The FAL features a pistol grip for ease of operation and control when fired either from the shoulder or from the waist, and its straight buttstock channels recoil energy directly to the rear, limiting the tendency for the muzzle to climb when the rifle is fired in fully automatic mode.

A folding carry handle is provided on the top of the receiver housing. These rifles can be field stripped without the use of tools for normal maintenance and cleaning. With the magazine removed, operation of a release catch permits the receiver and barrel groups to pivot on a hinge in a manner similar to that of a top-break shotgun. Further dismounting can be accomplished with minimal effort if necessary. Harrington & Richardson, located in Worcester, Massachusetts, was founded in 1871 by Gilbert H. Harrington, the inventor of the top-break revolver, and William A. Richardson. By 1876, H&R had become sufficiently established to be represented at the National Centennial Exposition in Philadelphia, where the company exhibited 24 of its pistols.

On April 3, 1952, H&R received an order for 100,000 M1 rifles plus spare parts, and the first deliveries were made a year later. The company's experience as producer of firearms enabled it to begin production without the start-up problems experienced by other military contract arms producers, including International Harvester. Unlike other M1 manufacturers, H&R also made extensive use of subcontractor-produced parts and components in their rifles. The end of hostilities in July 1953 meant that most H&R-produced rifles were added to postwar inventories.

The company continued to receive additional contracts for the M1, and by the time production ceased in 1956, H&R had produced 428,600 rifles. The end of production did not mark the end of the company's association with John Garand's rifle, as H&R later received a contract to rebuild 50,000 M1 rifles in 7.62mm NATO caliber for the U.S. Navy. In late 1954, Harrington & Richardson received an additional contract to conduct an engineering study aimed at production of 500 T48 rifles, an American version of the Belgian FN FAL .30 caliber rifle which was under consideration as a possible successor to the M1 as the U.S. military's standard battle rifle.

In 1957, the Army adopted the Springfield Armory-developed M14, which was based on John Garand's original M1 design. These rifles becamethe first multi-purpose American infantry rifle, replacing the M1 rifle, M1 carbine, Browning Automatic Rifle, and M3 submachine gun. As with the M1, the Army issued contracts for the M14 to Winchester and H&R to supplement production at Springfield Armory. H&R's tool-up and manufacture began quickly, with the company utilizing machinery left over from M1 production, but problems arose with subcontracted parts.

To further complicate manufacturing efforts, inspectors discovered cracks in some receivers. H&R's M14 production came to a halt as the Army changed both metallurgical and heat treatment specifications for these rifles. With problems now corrected, H&R was able to make up for lost production time and get back on schedule by August 1961. By the time production ceased, Harrington & Richardson had manufactured over 500,000 M14s, making the company the largest manufacture of these rifles.

H&R also produced the M16 "black rifle" under contract with the Department of Defense, as well as the M4 survival rifle, a .22 Hornet/.410 combination gun manufactured for use by U.S. Air Force flight crews. Harrington & Richardson exists today, but under a new name, the New England Firearms/H&R 1871.

In addition to producing a complete line of pistols, rifles, and shotguns based on their earlier designs and ranging from inexpensive to presentation-grade models, the company is a U.S. distributor for British-made Webley & Scott shotguns.