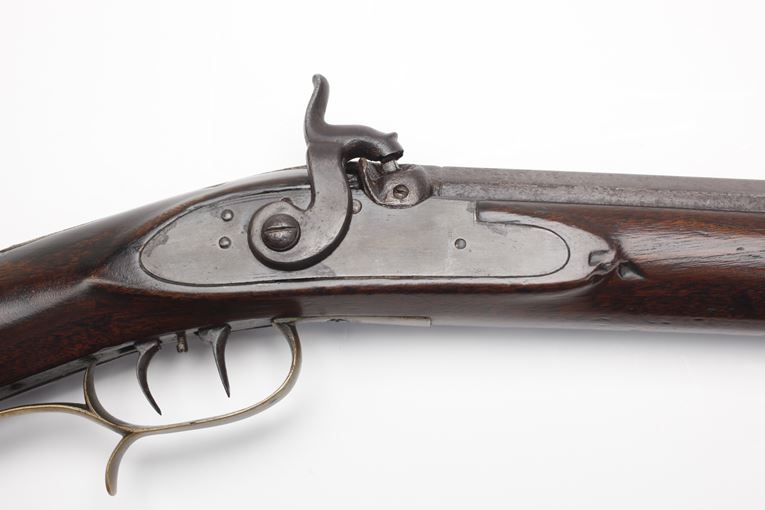 The stock of this rifle is a period replacement that incorporates another Hawken rifle's patchbox.


Circa 1849 Samuel Hawken (U.S.) Percussion Plains Rifle (single-shot/ muzzle-loading/ black powder/ ball ammunition)  The late 1840s saw an increase in U.S. westward expansion, up the Missouri River, across the Great Plains, over the Rocky Mountains, and to the Pacific coast.  At first, the lure was fur, then cheap land, and finally, gold.  Symbolic of this movement was a half-stock heavyweight firearm, variously called the Plains Rifle" and the "Mountain Rifle," which originated in St. Louis, Missouri.

The most famous makers of these rifles were two brothers, Jake and Sam Hawken.  This example was made by Sam Hawken in 1849, just as the California Gold Rush began.  It and its kin are symbolic of the fervor for Manifest Destiny, which had infected the U.S. between 1835 and 1850.  Soon after 1850, however, the spoils of this Manifest Destiny would lead to internal disagreement over the expansion of slavery into new lands."    - Dr. William L. Roberts, THE AMERICAN LIBERTY COLLECTION; #58

The Hawken name is well known to students of the 19th century American West, as well as to firearms collectors.  The family's association with gunmaking began with brothers Christian and Nicholas Hawken, of Hagerstown, Maryland, who established themselves as makers of "Kentucky" rifles.  Christian's sons George, John, Jacob, Samuel, and William later followed in their father's footsteps.  Three of the brothers remained lifelong residents of the Hagerstown area, while Jacob and Samuel headed west.

Jacob, George and John were all employed for a time at the U.S. Armory at Harpers Ferry, Virginia beginning in 1807 and continuing until 1818.  Jacob later relocated to Missouri, settling first in New Madrid in 1819, then in St. Louis a year later.  By 1821, he had gone into business with gunsmith James Lakenan, who had come to Missouri from Henrico County, Virginia after working at the Virginia Manufactory of Arms.  The experience gained by both men in the armories of Harpers Ferry and Richmond was reflected in the rifles produced by the pair, which were patterned after Virginia iron-mounted military and hunting arms.  These patterns continued to influence the design of later Hawken rifles.   Jacob Hawken continued in the business after Lakenan's death in 1825.

Jacob's younger brother Samuel originally established a business in Xenia Ohio before joining Jacob in St. Louis after the deaths of their father and Samuel's wife in 1822.  Initially, Samuel started his own gunsmithing shop, but the two brothers entered into a partnership three years later.  Best known for their heavy octagonal-barreled "Plains Rifles" with bores up to .60 caliber, Jacob and Samuel Hawken also produced light sporting rifles, shotguns, and pistols.  Initially the brothers made their own barrels at their forge near St. Louis with the help of hired workers, but later, they followed the trend of buying factory-made barrels, which enabled them to increase production and possibly to reduce their workforce as well.  Locks were both made in the Hawken shop and purchased from other sources, while stocking operations were most likely carried out by the brothers and their employees.

The earliest J. & S. Hawken rifle order that can be documented dates from 1831, and in that year and the one following, orders for 18 rifles were placed with the company.  Both half- and full-stock models were available.  Some of these were flintlocks, but percussion arms account for the bulk of their production.

Manufacture of Hawken pistols was limited to the years prior to the Mexican War, and these sidearms were carried for the most part by overland explorers and military officers.  Pistols ranged in price from $8 to $18 each, while rifles were sold for approximately $20 for plain full-stock examples to $38 for best-grade arms.  Shotgun prices may have been as low as $10.

For the period from 1821 to 1855, gun orders accounted for about 60% of the income realized by the Hawken brothers.  Jacob and Samuel Hawken also produced stocks and repaired guns in addition to manufacturing their own arms.  The firm also provided other goods and services to fur traders, outfitters, and related businesses of the period, most notably the American Fur Company.  Legend has it that westward-bound trappers and traders stopped by the Hawken rifle shop to place their orders, but these guns were most likely purchased by outfitters and fur companies and shipped west for re-sale.

Although the Hawken name is often associated with the mountain men and trappers of  the period before the Mexican War, the popularity of these guns peaked in later years, by which time the buffalo had replaced the beaver in economic importance.  The Hawken rifle established a reputation as a well-made and reliable hunting arm suitable for taking bison, bear, and other big game.  The discovery of gold in California and the exploration of overland routes to the Pacific also contributed to the demand for these rifles.

Sales of Hawken rifles peaked in about 1855, then slowly declined over the next ten years in the face of competition from military rifles and from the products other armsmakers including Colt and Sharps.  Accounts indicate that Samuel Hawken had the opportunity to market Samuel Colt's products as well as his own but that he refused, even though he could undoubtedly have made a profit from Colt sales.

Samuel continued to operate the business after Jacob's death in the cholera epidemic of 1849.  In addition to his business ventures, Samuel was active in the civic affairs of his adopted hometown, both serving on the fire department and, on at least one occasion, he was a candidate for Mayor of St. Louis.  The later history of Samuel's life and enterprises is unclear, with sources indicating a variety of different outcomes to his life's story.  Upon his retirement in 1854, Samuel may have sold the business to J. P. Gemmer, an employee of the firm.  Other sources indicate that Samuel's son, William S. Hawken, and William's business partner Tristram Campbell, took over the firm, with William continuing with the business after the 1856 breakup of the partnership until he was forced to close the shop in the aftermath of the Panic of 1857.

Still other sources claim that the business passed to William L. Watt and Joseph Eterle, who later sold it to Gemmer.  In any event, both Samuel and William relocated to Denver.  Once again, there are conflicting accounts in this chapter of the Hawken saga.  William again entered into the business of manufacturing firearms in Colorado, and Samuel may have done so as well.  Sources claim that Samuel returned to St. Louis in 1861, while William remained in Denver.  Samuel died in 1884 at the age of 92, and William followed him to the grave in 1900.

The Hawken rifle has achieved legendary status in the history of the pre-Civil War American West.  Unfortunately, most of the Hawkens produced have not survived to the present day.  Over the past one hundred years, numerous authors have written about these arms and their popularity with the trappers, explorers, hunters, and prospectors who tamed a continent during the 19th century.  As with most legends, myth has become intertwined with fact, and many accounts indicate that just about everyone who ventured to the Rockies before the Civil War carried a Hawken rifle on their trek.

While the Hawken brothers undoubtedly produced many rifles, some of which did find their way to the Rocky Mountains and beyond, many other Hawken rifles were purchased and used by residents of Missouri and surrounding areas.  Jacob ans Samuel Hawken weren't the only source for these arms, as many westward-bound adventurers were outfitted with firearms from other makers in St. Louis, Kentucky, Pennsylvania, and even Europe.  Nonetheless, the quality of Hawken rifles and their association with such notables as Jim Bridger, Jeremiah Johnson, and Kit Carson cannot be overlooked, and these arms rightfully occupy a prominent place in the history of the United States.