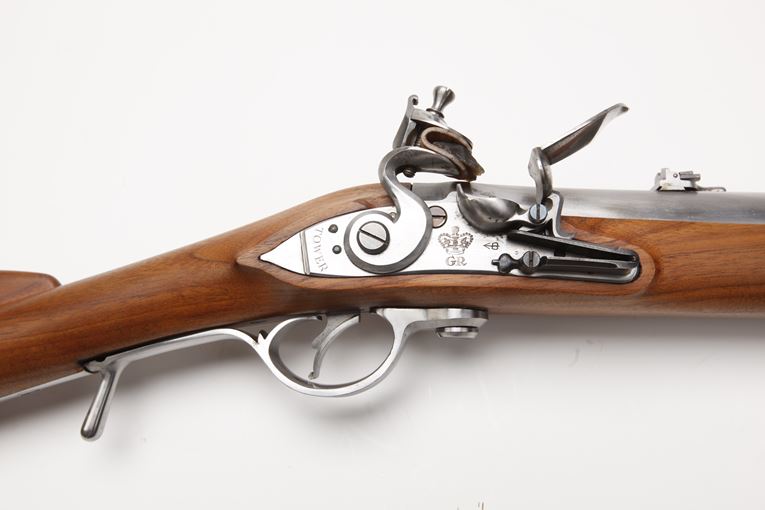 These long arms featured a screw-thread breech plug attached to the trigger guard that could be opened and closed quickly in combat without detaching it from the rifle. To load, the plug was opened with a single clockwise rotation of the trigger guard. With the barrel tipped downward slightly, a ball was placed into the breech cavity and allowed to roll forward until it rested against the rifling grooves, and the cavity was filled with a powder charge. The plug was then closed by rotating the trigger guard counter-clockwise.


The Ferguson Breech-loading Rifle was far superior to the standard smoothbore muzzle-loading muskets of the period, but for reasons still unknown, fewer than 200 were used by His Majesty's troops during the American Revolution. It has been stated that Britain could have won the war quickly and decisively if her leaders had the foresight to produce large numbers of these rifles and distribute them to trained infantrymen. Designed by Colonel Patrick Ferguson, a Scottish-born inventor, career military officer, and accomplished marksman, this rifle represented a military adaptation of early civilian breech-loading sporting arms. Ferguson's 1776 patent covered improvements to a breech-loading rifle that had been patented in 1721 by Isaac de la Chaumette, a French Protestant engineer who fled to England to escape religious persecution. Ferguson employed a movable vertical breech plug ahead of the fixed horizontal plug found in muzzle-loading rifles. The plug was attached to the front of the trigger guard, which served as a handle, and one full 360-degree turn of the handle served to open the breech. A ball was then dropped into the open breech and allowed to roll forward until it contacted the rifling lands. The chamber behind the ball was then filled with powder, and the breech was closed by turning the trigger guard. Fouling of the movable breech plug could cause problems, however. Ferguson's improvements over the earlier de la Chaumette design consisted principally of recesses and diagonal channels in the plug capable of trapping fouling and holding lubricant; a hollow in the solid breech behind the plug as an additional trap for fouling; a barrel projection which prevented the lowered plug from falling out entirely, and an adjustable sliding rear sight for accuracy's sake. During the American Revolution, Colonel Ferguson served with the 70th Regiment and was killed at the Battle of King's Mountain, South Carolina, in October, 1780. Ferguson's troops at King's Mountain were not armed with his rifle. The Ferguson rifle was only employed on a limited scale at the battle of Brandywine during the American Revolution and Ferguson was wounded during this engagement.