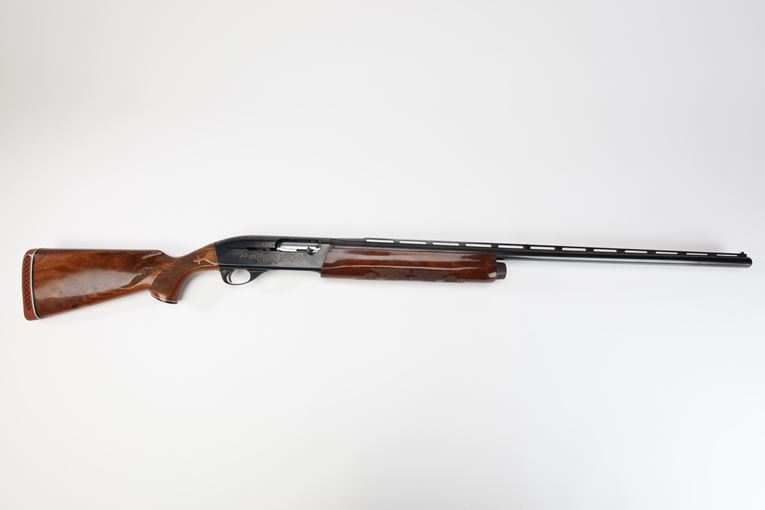 The Remington Model 1100 Autoloading shotgun was introduced in 1962 and has grown to be one of the world's most successful autoloading shotguns. This 1100 TB Trap Bicentennial Model was one of four 12 gauge 1100 commemorative variations available in 1976 honoring America's Bicentennial. The TB Model with regular or Monte Carlo Trap stocks and distinctive colonial motif surrounded by decorative scrollwork was centered on the left side of the receiver panel, and the gun was marked with the dates "1776" and "1976." Approximately 5,000 Bicentennial Model 1100 shotguns were sold.

The post-war years brought smaller pocket pistols and deringers, the Remington-Smoot metallic cartridge pistols, Remington Single Action Army revolvers, rolling block rifles and pistols, slide, autoloading, and hammerless shotguns, and the Remington-Hepburn falling block rifles. During the 20th century, Remington has established itself as a manufacturer of high quality sporting arms, especially with upland game and bird hunters. The company also did its part during two World Wars as a manufacturer of military arms and munitions. In addition to the M1911 semi-automatic pistol, the Browning Model 1917 heavy machine gun, and the Model 1917 bolt-action rifle, Remington also manufactured the Pedersen device.

This was an early attempt to increase the firepower of individual infantry troops armed with the Springfield Model 1903 rifle. These rifles were modified by cutting the receiver wall to accommodate an ejection port, and the replacement of the bolt with a semi-automatic assembly that accepted a 40-round stick magazine loaded with the .30 caliber Pedersen, a pistol-class cartridge. Over 65,000 Pedersen devices were manufactured, but most were scrapped after the war. During the Second World War, Remington manufactured the M1903 (Modified) rifle, a transitional long arm in which stamped parts replaced some that had been milled in the earlier model, while other parts were dispensed with altogether in the interests of reducing production time. The company also manufactured the redesigned M1903A3 battle rifle and M1903A4 sniper rifle.