Remington Model 32 TC Over Under Shotgun 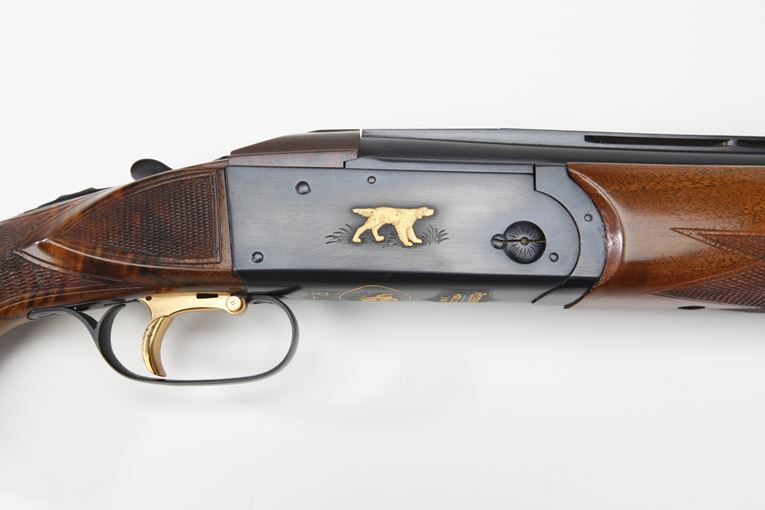 This ornate shotgun features gold relief depictions of hunting dogs on the receiver. SN 1462. Remington included a sliding breech cover that locks the barrels into place from the top. The cover locks the action and provides protection from any blowback from a pierced shotshell primer. Also unique to the Model 32 is the lack of fillets between barrels - Remington used a muzzle sleeve to allow barrels to expand and contract without locking one barrel to the other one.

After showing his new gun to area residents, he soon had a large number of orders for gun barrels. These were octagonal in shape, and as with his initial effort, boring and rifling was done by a gunsmith in nearby Utica. The completion of the Erie Canal in 1825 and the establishment of railroads soon thereafter provided an economic boost to the region. Remington's rifle barrel works expanded as well. By 1828, he had established his own forge in Ilion, and he soon came to dominate the local trade, producing over 8,000 barrels per year for gunsmiths who would do final rifling and fitting. In 1844, Remington's oldest son, Philo, joined him in his business. This was reflected in the firm's name, which became E. Remington and Son. By the mid-1850s, his two other sons, Samuel and Eliphalet III, had also joined the company, and the name changed yet again.

Eliphalet Remington II died in 1861, at which time Philo took over management of the company. Samuel died in 1882, and Philo purchased his share in the company. By 1886, E. Remington & Sons had experienced serious downturns, and the company went into receivership. In 1888, Marcellus Hartley, a partner in the New York sporting and military goods firm of Schuyler, Hartley, and Graham, as well as the founder and owner of the Union Metallic Cartridge Company, went together with Winchester Repeating Arms Company to purchase Remington.

Each partner had an equal share of the firm, which was renamed Remington Arms Co., with Hartley serving as president and Thomas Bennett of Winchester assuming the role of vice president. In 1896, Winchester sold its stake in Remington to Hartley. Marcellus Hartley died in 1902, and leadership of the company passed to Marcellus Hartley Dodge.