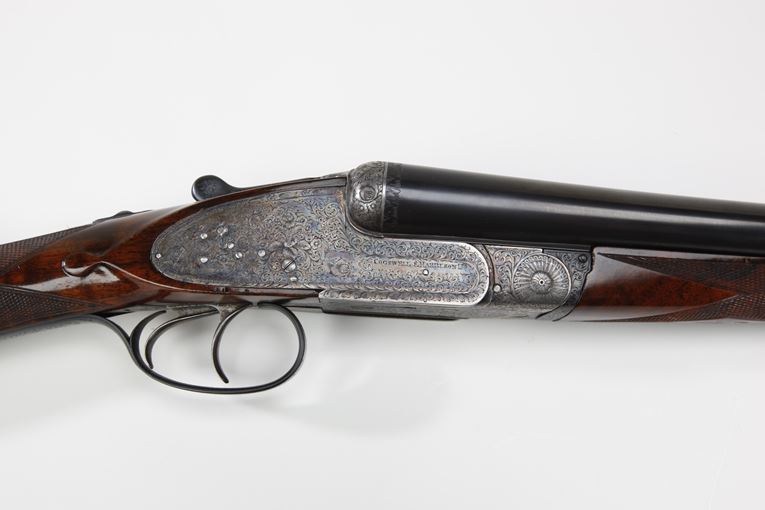 Shotguns of this type were once the exclusive mark of the cream of society.


1937 Cogswell & Harrison Side-by-side Double-Barrel Shotgun (breech-loading/ smokeless powder/ cartridge ammunition)  In 1937, the lives of the upper class in North America were about to undergo change.  At the start of World War II, the very rich lived in an exclusive world, where they were able to exercise some very exclusive privileges.  When the war ended, most of these were relegated to strata near the top of a gigantic middle class.

The English shotgun displayed here symbolizes the prestige of those who could afford to own it.  Made before the war, the gun was a proud piece of art to the Canadian who bought it.  After the war, the art was still there, but the proud symbolism had changed.  Instead, a fine gun symbolized the wealth of an owner who could afford it, not necessarily a member of an aristocratic upper class.  Certainly the Cogswell & Harrison gun constitutes a thing of beauty, but its ownership is no longer exclusive.    - Dr. William L. Roberts, THE AMERICAN LIBERTY COLLECTION; #136

The London gunmaking firm of Cogswell & Harrison Ltd. traces its origins to a period prior to the American Revolution, when Benjamin Cogswell started a business in the British capital.   Cogswell had been a pawnbroker and later the owner of a gun warehouse, and his company was not listed as a manufacturer of firearms until 1857.  By this time, Cogswell's oldest son, Benjamin, had taken over the business, which was well-known for its percussion revolvers, pepperboxes, and dueling pistols.  In 1860, Edward Harrison became a partner in the firm, and the name was changed to reflect this.

Cogswell & Harrison entered a period of great profitability as a supplier of arms to the French during the Franco-Prussian War of 1870.  Production facilities were located at Wimbledon, but a larger factory Harrow and shops in The Strand and New Bond Street, London, produced and marketed the firm's products until a fire totally destroyed the Harrow factory.  The company purchased a new, larger factory at Gillingham and began to produce cartridges in addition to firearms.  The cartridge business was later discontinued due to competition from other manufacturers.  A later venture into the manufacture of propellants ended disastrously when Cogswell Harrison, Edward's grandson, was killed in an explosion at the Colnbrook powder factory in 1915.

Edgar Harrison, Edward's son and Cogswell's father, also joined the firm as a partner, and in 1864, he received his first patent for a pinfire double shotgun featuring an underlever that both opened the gun's action and brought it to half-cock.  Edgar also held patents both singly and with others for hammerless shotguns, a combination walking stick/airgun, clay pigeon traps, and a bicycle.

Cogswell & Harrison introduced the Victor hammerless gun in 1879.  Other firsts for the company include the Avant Tout hammer ejector gun, introduced in 1888, and a single trigger double shotgun that appeared on the market in 1895.  The firm's first over-and-under design was completed in 1945 after a lengthy development period.  In addition to its line of shotguns, the company also produced double rifles in calibers ranging from .400 to .577.

In 1908, Cogswell & Harrison purchased Moore and Grey, an established firm that had marketed Cogswell & Harrison-produced arms under its own name.  The firm also opened shops in Piccadilly at the Avenue de l'Opera in Paris.  These were frequented by gentlemen sportsmen, as were the shooting schools operated by the company.  Cogswell & Harrison firearms were purchased by at least five reigning monarch, and the Maharajah of Johore maintained a standing annual order for two of the firm's Cosmos shotguns, which he presented as gifts to important guests.

Economic difficulties in the post-First World War period brought about a reorganization of the company in 1933.  Additional changes came about with the death of Edgar Harrison in 1938 and the appointment of R. Stuart Murray and John Peskett as the firm's director and managing director.  During the Second World War, Cogswell & Harrison was one of many British firms engaged in war production, and after the return of peace, C&H was purchased by the American-based International Armament Corporation.  The company continued to grow under its new owners, who purchased both a new factory at Acton and the Birmingham firm of Wright Brothers.  Cogswell & Harrison's British shareholders purchased the company's retail operations in 1963.

After a period in which Cogswell & Harrison concentrated on the production of less expensive boxlocks and single-barrel shotguns, the firm returned its focus to high-quality sporting arms with the introduction of new management in 1993.  At present, the company produces Woodward-type over-and-under shotguns, as well as Beesley self-opening sidelock ejector guns.  Many of these guns are produced on a custom order-only basis, with delivery in 18 to 24 months at prices approaching $60,000.  Cogswell & Harrison also offers a repair and restoration service for older guns that will provide owners with full production details including original specifications and date of manufacture.