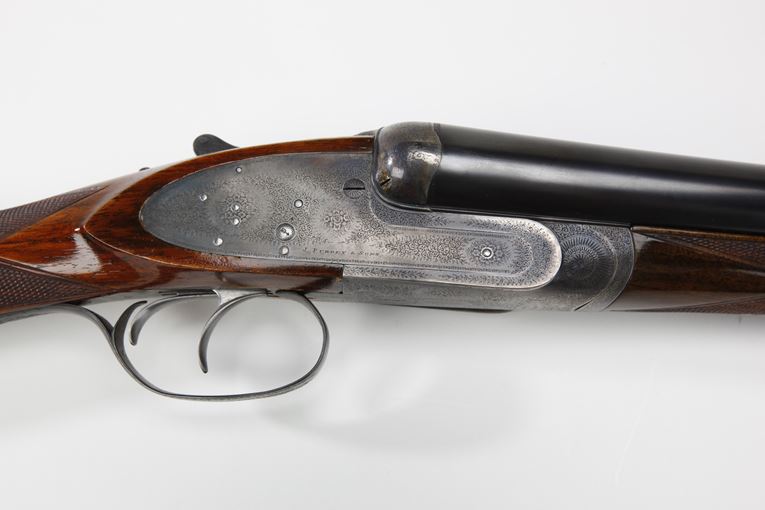 
Founded nearly 200 years ago, James Purdey & Sons, Ltd. have built a reputation as makers of some of the finest firearms in the world.  James Purdey was born in 1784 in London and later apprenticed as a gunmaker under Thomas Hutchinson of Whitechapel.  After completing his apprenticeship in 1805, he was employed by Joseph Manton, the best-known gunmaker in England.  Four years later, Purdey worked for Reverend Dr. Alexander Forsyth, the Scottish clergyman, hunter, and inventor of the pill lock ignition system.

In 1814, Purdey opened his own shop in London, where he produced both longarms and pistols.  He quickly established a reputation as a maker of high quality arms, so much so that he received orders from Queen Victoria and other members of European royal households.  In 1841, Purdey was elected to the prestigious position of Master of the Worshipful Company of Gunmakers of City of London, and in 1857, Edward, Prince of Wales, granted Purdey a Royal Warrant of Appointment as a gunmaker.  Having reached the pinnacle of his career, the 73 year old Purdey turned the company over to his 30 year old son, James.  James Purdey Sr. died in 1863.

The company continued to build its reputation under this new Purdey management.  In addition to his gunmaking talents, James the Younger would prove to be a shrewd businessman who was able to hire and keep some of the most talented craftsmen in Britain.  He was also an innovator.  In 1870, Purdey patented a simple thumb-operated mechanism that enabled shooters to open their guns without changing their grip on the stock.  Although this system is now widely used, it was a milestone in an era when the underlever action was a standard feature in many breech-loading firearms.  In addition, Purdey was able to see merit in the work of others, and before the decade was out, he took a license for a hammerless self-opening action that had been developed by former employee Frederick Beesley.  These features, which assured the company's fame and fortune, became standard in Purdey double guns to the present day.

As the new century dawned, the torch was again passed to James the Younger's son, Atholl.  Like his father, Atholl had grown up in the family business, and Atholl's son, Tom, would also take his place as the latest of Purdey's Sons.  The outbreak of war in its centennial year nearly caused the collapse of the firm, as orders for sporting arms became nearly non-existent.  Atholl was able to stave off bankruptcy by obtaining a contract to produce muzzle protectors for British Army rifles, an essential item for the infantryman's kit when fighting in the mud of France and Belgium.  Post-war orders from overseas shooters provided a meager profitability for a time, but the return of war contributed to a reverse in the firm's recovery.

Once again, defense contracts saw the company through, but the immediate post-war years left Purdey in a dire financial situation.  After four generations, the venerable gunmaking firm passed out of the hands of the Purdey family and was acquired by Sir Hugh Seely, a wartime cabinet official.

Prior to the Second World War, Purdey's had been working to develop an over-and-under shotgun in response to the increasing popularity of this design in the United States.  The firm's present association with these arms would come about in 1948, when James Purdey & Sons purchased James Woodward & Sons, builders of perhaps the finest over-and-under shotguns available.  Improved Woodward actions are still featured on Purdey over-and-under guns.

In 1949, Richard Beaumont began his career at James Purdey, and his efforts over the next three decades would ultimately turn the company back to profitability.  At the start of Beaumont's tenure, debts continued to mount, as did backlogs for orders.  The firm was taking up to five years to complete the manufacturing process on some guns, and the price of the finished product was nearly 70 percent below production costs, but by the mid-70s, this situation had been brought under control through Beaumont's hard work and leadership.

In 1994, James Purdey & Sons was acquired by Vendome Luxury Group, the corporate parent of such well-known companies as Cartier and Dunhill.  Presently, Richard Purdey, great-great-great grandson of the company's founder, has taken over from Richard Beaumont as the firm's Chairman of the Board while Nigel Beaumont, Richard's cousin, serves as Managing Director.  The Purdey offices at Audley House in London's fashionable Mayfair district have been restored to their Edwardian elegance, and the firm continues to manufacture fine sporting arms at its Hammersmith facility outside London.  Here, state-of-the-art computerized machinery works alongside some of the world's finest craftsmen to produce fewer than one hundred custom-built shotguns and rifles per year, and future generations of craftsmen are trained through the Purdey apprentice system.

Currently, new Purdeys sell for over 30,000 pounds Sterling and take about eighteen months to complete.  With over 12,000 post-1880 Purdeys still in existence, care and repair of vintage models also constitutes an important part of the business. In addition to longarms, the company has expanded its product line to include quality clothing and shooting accessories.