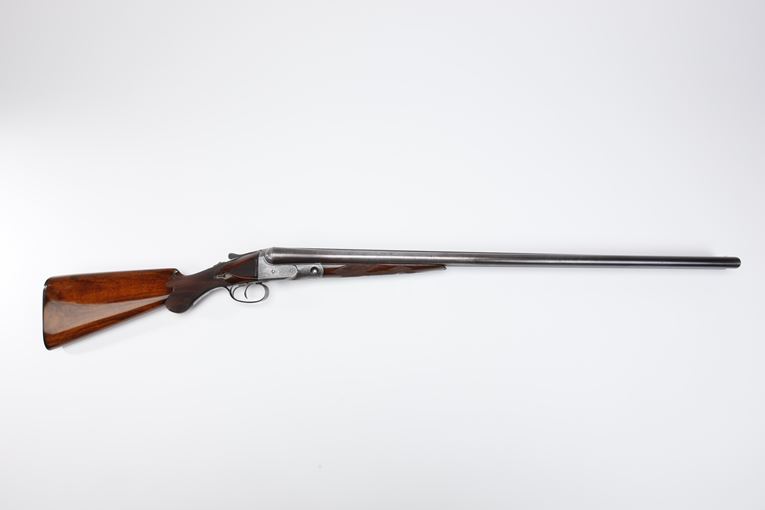 The grip shield is engraved, "Annie Oakley, April 1901." Other features include double triggers; semi-pistol grip stock; engravings of bird dogs on the receiver sideplates and of a pair of stags on the underside; and a hard rubber buttplate. Barrels are of Titanic steel. The diminutive Oakley, who weighed less than 100 pounds, typically specified a pull measurement of 13 5/8 inches. She and her husband, Frank Butler, purchased 27 Parkers between 1881 and 1918.


According to the Parker Company Order Books, this BH-Grade shotgun was purchased by Frank Butler, Annie Oakley's husband and partner, on March 22, 1901. Parker Brothers accepted another of their guns, serial number 94649, in trade for this model. The gun was delivered to him two months later in Allegheny City, Pennsylvania (later annexed by the City of Pittsburgh), where the duo was performing with Buffalo Bill's Wild West Show. Miss Oakley evidently preferred her old Parker to the new model, and about ten days after its initial receipt, Frank Butler returned this gun to the manufacturer in return for Annie's original gun that had been taken in trade.

In November 1901, Parker shipped this gun to Tyron Co. of Philadelphia for "show purposes," and then to Fletcher Hardware in Detroit for "exhibition" in January 1902. The company apparently did not seek to make a connection between this gun and Annie Oakley, possibly because her ownership lasted for only a very brief period. No existing records show that the gun was either returned to the factory or shipped elsewhere, which might indicate that it was sold while in Detroit. Parker shotguns are prized by both collector and hunter as being among the finest in the world. These handcrafted sporting arms trace their origin to Meriden, Connecticut, where in 1832, Charles Parker established a shop for the manufacture of hardware and various household goods, including coffee mills and waffle irons.

In post-war years, this firm altered muzzle-loading military rifles utilizing the Miller's breech-loading patent of 1865. Soon afterward, Parker brought his sons Wilber and Dexter into the business, forming the firm of Parker Brothers for the purpose of manufacturing side-by-side sporting shotguns featuring a lifter-type action. Charles A. King, a former designer with Smith & Wesson, later reworked the earlier Parker designs and replaced the lifter action with one that featured a top latch. King also designed the first hammerless Parker. Another series of design changes occurred in the early years of the 20th century, when James Hayes patented a revised cocking system that greatly reduced the number of parts used. The addition of a single trigger, a ventilated rib, and a beavertail fore end, all took place during the 1920s, virtually completing the evolutionary process of the Parker.

Parker Brothers remained in business from 1867 until 1934, when the firm was acquired by the Remington Arms Co. Parker shotguns continued to be manufactured in Meriden until 1938, when production moved to Remington's Ilion, New York facilities. Both the Parker name and line were discontinued in 1942. Nearly 243,000 guns were produced during this period.