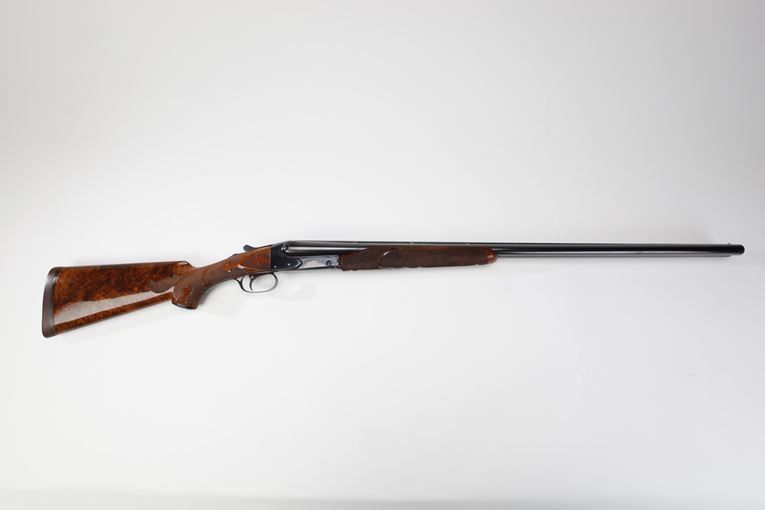 Winchester's first side-by-side shotgun began production in 1929, with the first guns received in the shipping warehouse in 1930.  This model was first offered in the 1931 Winchester catalog.  Approximately 32,500 were made during the first production run from 1931 to 1988.  This 1951-produced example has a 32 inch ventiliated rib barrel, choked (left) improved modified and (right) full, and weighs 8 pounds, 5 ounces.


John Moses Browning (1855 - 1926) was a true genius of mechanical design.  The son of a Mormon gunsmith, he began working full-time in that profession at age 15.  His 1878 design for a single-shot metallic cartridge rifle resulted in the first of many patents that he would receive during his lifetime.

In partnership with five of his brothers, Browning later opened a machine shop in Ogden, Utah, but  the firm's output of three guns per day could not keep up with demand for his products.  One of his rifles was purchased by a representative of Winchester Repeating Arms Company and shipped to Thomas G. Bennett, the firm's General Manager, who purchased the patent rights for $8,000 and hired the Browning brothers as Winchester "jobbers".

In the summer of 1896, Browning traveled to Colt's Manufacturing Company in Hartford, Connecticut with four patented semi-automatic pistols of his design.  Two of these guns were forerunners of such famous arms as the Fabrique Nationale Model 1900 and the Colt Model 1911.  All possessed features that are still commonly used on semi-auto pistols such as slides, slide springs located over, under, or around the barrel, grip safeties, and detachable magazines located inside the butt.  As a result of this visit, Browning signed an agreement that licensed Colt to produce his pistols and promised additional licenses for improvements in these designs.  In return, Colt agreed to provide royalties, something that was foreign to Winchester at that time, as the firm bought patents outright from their designers.

A year later, while visiting the Colt offices, Browning met Hart O. Berg of Fabrique Nationale of Belgium.  Browning, Colt, and FN entered into a licensing agreement that gave the North American market to Colt, the European continent to FN, and a shared market in Great Britain.  In addition, the two firms agreed to pay cross royalties for territorial "infringement."

In 1915, Browning anticipated U.S. entry into the war that was then raging in Europe, and designed two machine guns that would see wide service over the next several decades.  The first was a water-cooled machine gun, chambered for the .30-06 cartridge, that successfully fired 20,000 rounds during two different trials without a malfunction.  This gun also fired a continuous burst for over 48 minutes, ending only when the ammunition belt was completely expended.  The second of these designs was for the B.A.R., or Browning Automatic Rifle, a 15-pound light machine gun that also chambered the .30-06 cartridge.  When the United States went to war in 1917, the government bought production rights for these two guns, as well as the Colt Model 1911 pistol, for $750,000.  Browning moved to Hartford to supervise the manufacture of these guns by Colt and other contractors, but by the time production reached its peak, the war had ended.  However, these guns played an important role during the Second World War and other conflicts.