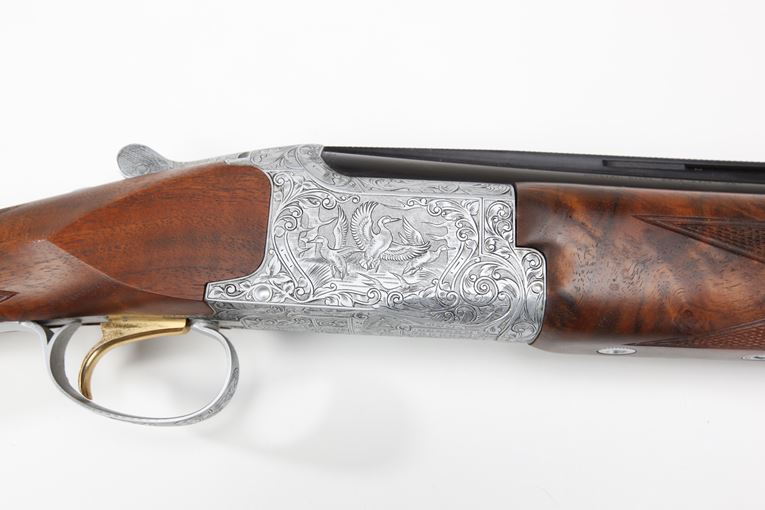 As with other brands and models, Browning Citori shotguns are available in a variety of gauges and features for skeet, trap, sporting clays, and field use.

In partnership with five of his brothers, Browning later opened a machine shop in Ogden, Utah, but  the firm's output of three guns per day could not keep up with demand for his products.  One of his rifles was purchased by a representative of Winchester Repeating Arms Company and shipped to Thomas G. Bennett, the firm's General Manager, who purchased the patent rights for $8,000 and hired the Browning brothers as Winchester jobbers".

At this time, Winchester's popular Model 1873 lever-action rifle could not handle large-caliber ammunition such as the .45-70 cartridge.  Browning set himself to this task, and he designed and patented a simple but strong lever-action rifle with a smooth action.  This rifle, which would become the Winchester Model 1886, could handle cartridges as large as the .50-110 Express, and is considered by some to be the finest lever-action rifle ever.

Browning was no stranger to Colt. In 1888, he came up with the idea of harnessing propellant gas from the muzzle of a rifle to cycle the gun's action.  Three years later, he took his patented design for the world's first gas-operated fully-automatic "machine gun" to Hartford.  Under Colt auspices, he demonstrated this gun for the U.S. Navy, which was interested in obtaining machine guns that were capable of firing continuously for three minutes.  Browning doubted the ability of his prototype, with its 600 rounds-per-minute rate of fire, to stand up to this punishing test.  Although the barrel turned red-hot, the gun successfully completed the trial, and Browning signed a licensing agreement with Colt.  These machine guns later saw action in both the Spanish-American War and the Boxer Rebellion.

In 1915, Browning anticipated U.S. entry into the war that was then raging in Europe, and designed two machine guns that would see wide service over the next several decades.  The first was a water-cooled machine gun, chambered for the .30-06 cartridge, that successfully fired 20,000 rounds during two different trials without a malfunction.  This gun also fired a continuous burst for over 48 minutes, ending only when the ammunition belt was completely expended.

The second of these designs was for the B.A.R., or Browning Automatic Rifle, a 15-pound light machine gun that also chambered the .30-06 cartridge.  When the United States went to war in 1917, the government bought production rights for these two guns, as well as the Colt Model 1911 pistol, for $750,000.  Browning moved to Hartford to supervise the manufacture of these guns by Colt and other contractors, but by the time production reached its peak, the war had ended.  However, these guns played an important role during the Second World War and other conflicts.

Browning's post-First World War military designs included both water- and air-cooled .50 caliber machine guns, and a 37 millimeter automatic cannon for use in aircraft.  For the civilian market, he was responsible for the Auto-5 semi-automatic shotgun, the Superposed double shotgun, the Hi-Power semi-automatic pistol, and several other designs, including a .22 caliber rifle with one spring and a single moving part.

All told, John Browning received over 120 U.S. and foreign patents for over 80 different firearms, and his designs were produced by a variety of manufacturers.  He died of heart failure in 1926 at age 71 in the Fabrique National office of his son, Val.