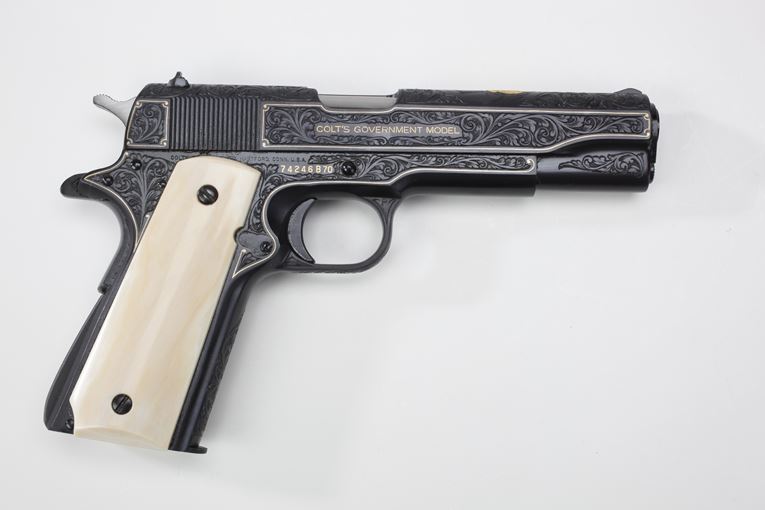 John Moses Browning (1855 - 1926) was a true genius of mechanical design.  The son of a Mormon gunsmith, he began working full-time in that profession at age 15.  His 1878 design for a single-shot metallic cartridge rifle resulted in the first of many patents that he would receive during his lifetime.  In partnership with five of his brothers, Browning later opened a machine shop in Ogden, Utah, but  the firm's output of three guns per day could not keep up with demand for his products.  One of his rifles was purchased by a representative of Winchester Repeating Arms Company and shipped to Thomas G. Bennett, the firm's General Manager, who purchased the patent rights for $8,000 and hired the Browning brothers as Winchester "jobbers".

In 1915, Browning anticipated U.S. entry into the war that was then raging in Europe, and designed two machine guns that would see wide service over the next several decades.  The first was a water-cooled machine gun, chambered for the .30-06 cartridge, that successfully fired 20,000 rounds during two different trials without a malfunction.  This gun also fired a continuous burst for over 48 minutes, ending only when the ammunition belt was completely expended.

The second of these designs was for the B.A.R., or Browning Automatic Rifle, a 15-pound light machine gun that also chambered the .30-06 cartridge.  When the United States went to war in 1917, the government bought production rights for these two guns, as well as the Colt Model 1911 pistol, for $750,000.  Browning moved to Hartford to supervise the manufacture of these guns by Colt and other contractors, but by the time production reached its peak, the war had ended.  However, these guns played an important role during the Second World War and other conflicts.

Samuel Colt was born in Hartford, Connecticut on July 19, 1814.  He showed an early fascination with science, and during his youth, Colt studied both chemistry and mechanics.  While still a boy, he attempted to produce a pistol that was capable of firing multiple shots without reloading, but his efforts were unsuccessful.