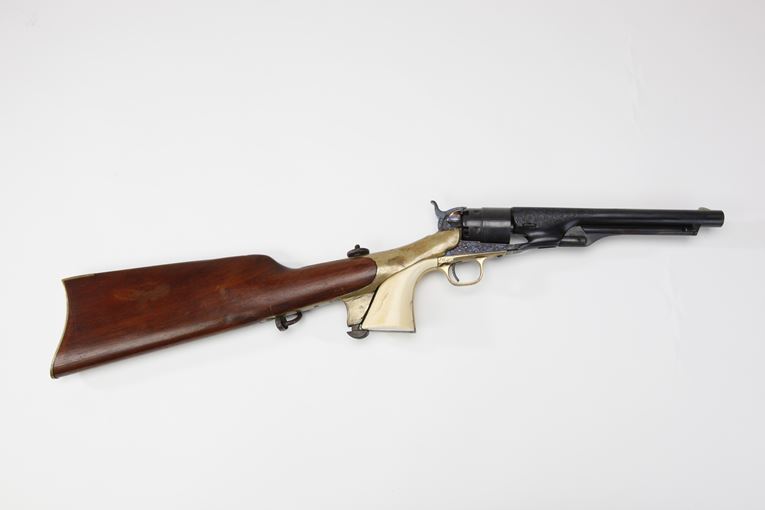 This factory-engraved revolver features carved ivory grip panels and a reproduction wooden shoulder stock.  Shoulder-stocked Colts like this example were capable of being used as a carbine for longer shooting distances.

In 1855, Colt introduced a spur trigger revolver that featured a fully-enclosed cylinder.  These sidehammer, or "Root" revolvers, were named for Elisha K. Root, a noted inventor and holder of the sidehammer patent, who at that time was employed as Colt's factory superintendent and Chief Engineer.  Colt also produced the sidehammer Model 1855 rifles and carbines for military and sporting use, as well as a revolving shotgun.

In failing health, Colt expanded his factory on the eve of the Civil War, and began production of a new, lightweight .44 caliber Army revolver, followed a year later by a .36 caliber Navy version.     Samuel Colt died in Hartford on January 10, 1862 at the age of 47.  Although he did not see the end of the Civil War, his products played an important role in its outcome.  During the war, the Hartford factory produced revolvers, as well as the Colt Special Musket, based on the government's Springfield Rifle-Musket.

The Model 1860 Army revolver was the primary issue revolver for U.S. troops, while other Colt revolvers were acquired through private purchase.  The Colt Special Musket was issued to state troops, and the Model 1855 Revolving Rifle saw service with both Union infantry and cavalry, as well as with Colonel Hiram Berdan's United States Sharp Shooters.