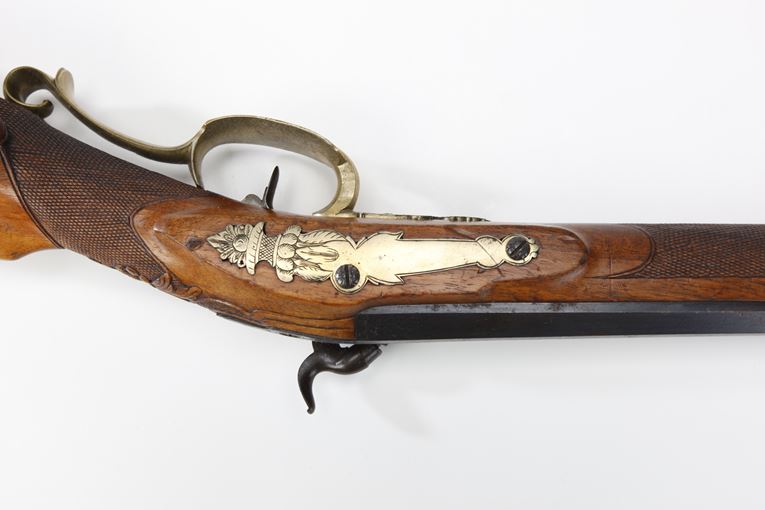 Heavy bore percussion arms in this configuration were often selected for hunting dangerous big game like boar at close range.   In smoothbore pattern, this type of gun could accomodate multiple large shot charges like buckshot or a single large patched ball.


Circa 1840 Willfurt (Germany/Mexico) Percussion Short Rifle" (single-shot/ muzzle-loading/ black powder/ ball/shot ammunition)  Fabricated in rifled or smooth-bore version (used with shot or ball), this short Germanic rifle was used in Mexico.  It can be compared to a Tennessee Rifle (see Case 30 gun #18).  Functionally, both arms share similar characteristics, but the European arm is more ornate and more costly.

In 1840, economic structure was such in the United States that a large number of people could buy a moderately-priced gun.  In Europe and Mexico, however, only a small number of people could buy a gun, but they could afford to pay a high price for it.  Such economic disparity encouraged European and Mexican immigration to the United States."    -  Dr. William L. Roberts, THE AMERICAN LIBERTY COLLECTION; #52