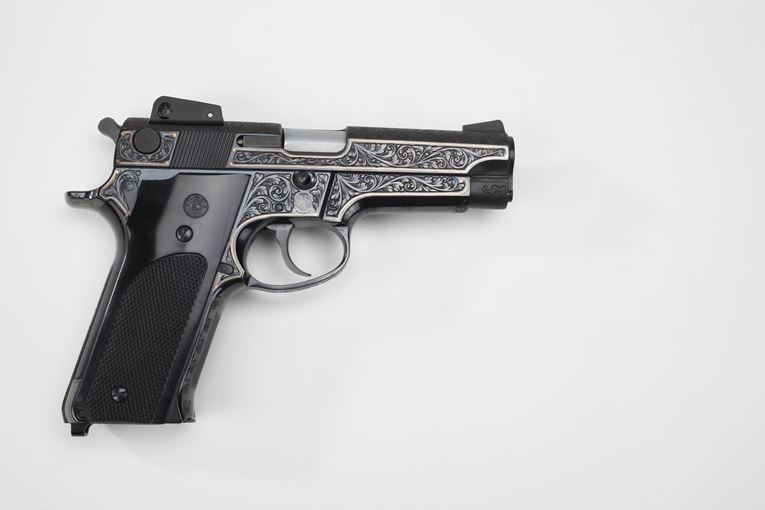 
Massachusetts natives Horace Smith and Daniel Baird Wesson, famous for their revolver designs, are also known for having developed the first practical American-made self-contained metallic cartridge, the .22 rimfire short.  Both men were experienced in the design and manufacture of firearms, and in 1852, they formed a partnership for the purpose of manufacturing magazine-type arms.  Their Norwich, Connecticut factory produced the iron-frame lever-action Volcanic pistol, patented in 1854 (see case 42 gun #1), which was a direct predecessor to the Henry and Winchester lever-action rifles that became famous during the Civil War and post-war periods.

The Volcanic was a lever-action pistol that featured a front-loading tubular magazine located under the barrel.  This gun used a unique type of ammunition that consisted of a hollow-base conical bullet containing propellant and backed by a primer disc.  In 1855, Smith & Wesson sold their interest to the newly-organized Volcanic Repeating Arms Company.  The firm's manufacturing facilities moved to New Haven, with Smith serving as plant manager for the new company, and Wesson working as plant superintendent.

Soon, however, both men left Volcanic and returned to Springfield, Massachusetts, Horace Smith's hometown.  In 1857, Volcanic went into receivership.  The firms assets were purchased by Oliver Winchester, a Volcanic stockholder, and was reorganized as the New Haven Arms Company.  Production was discontinued entirely in 1860, but the company survived, and by 1866 it became known as  Winchester Repeating Arms Co.

In November 1856, Smith and Wesson formed a second partnership to develop and manufacture a revolver that chambered metallic cartridges.  Wesson had continued earlier experiments intended to produce a self-contained metallic cartridge, and by August, 1856, he had completed a wooden model of a pistol designed to chamber a  rimfire cartridge.  Wesson soon discovered that a key feature of his design, a revolving cylinder that was bored to a constant diameter from end to end, had already been patented by Rollin White, a former employee of Samuel Colt.  Smith and Wesson entered into an exclusive license to use White's patent in the manufacture of their revolver.  White was to receive royalties of 25 cents per gun produced until the expiration of his patent in 1872.

During Smith & Wesson's first year of production, White saw a meager $1 in compensation, but this was soon to change.  By 1858, Smith & Wesson's production of both revolvers and ammunition was increasing, and would soon outgrow their original manufacturing facilities.  In 1860, the partners completed a new building that would allow continued expansion.  Eventually, Smith & Wesson would sell their interests in ammunition manufacturing, but the production of revolvers would continue.  Wesson's original design, the seven-shot Smith & Wesson Model No. 1 First Issue Revolver, was manufactured between 1857 and 1860.  This model, with modifications, continued in production as the Model No. 1 Second Issue and Model No. 1 Third Issue Revolvers, with nearly 260,000 of all three variants produced before discontinuation in 1881.

By this time, the firm's product line, payroll, and output had increased dramatically.  Revolvers chambered for .32, .38, and .44 caliber cartridges supplemented the original .22s, and the firm employed about 500 workers and produced 400 revolvers per day.  Smith & Wesson had become dominant in the manufacture of revolvers, and the company's products were sold around the world.

In July, 1873, Horace Smith retired after selling his interest in the company to D. B. Wesson.  By 1880, Daniel's three sons, Walter H., Frank L., and Joseph H. Wesson, were working alongside their father, but Daniel continued to make all major decisions.  Frank Wesson died in 1887, but Walter and Joseph continued as partners in the firm until D. B. Wesson's death in 1904.

Both Walter and Joseph were well-qualified to assume management of the family business, but neither they nor the executors of their father's estate could agree on the future direction of the company.  Without Daniel B. Wesson's strong guidance, the firm experienced a prolonged period of weak leadership.  Between 1912 and 1915, the two brothers alternated as president, until Walter's failing health forced him to cease active involvement with Smith & Wesson.  Joseph then became president, but his own health problems frequently kept him away from his office.

In 1917, the United States entered the First World War, and Smith & Wesson received large government contracts to produce revolvers for military use.  The company expanded its operations into a new facility, and increased its workforce as well, but Joseph's ill health, as well as labor disputes, created major problems for the gun manufacturer.  Consequently, the government took over management of the firm until the war ended.  With the return of peace, a surplus of military arms and the import of large numbers of inexpensive  guns produced additional challenges.  Joseph Wesson died in 1920, and Harold Wesson, Joseph's nephew, assumed leadership of the company.

Faced with dwindling sales and operating losses, Harold Wesson sought to diversify the company's product line.  With the exception of two brief forays into the manufacture of shotguns and sewing machines, the firm had always concentrated its efforts on the production of handguns, but Harold's tenure as president saw Smith & Wesson's entry into the manufacture of handcuffs, washing machines, and toilet flush valves.  None of these ventures stemmed the flow of red ink.

By the outbreak of the Second World War, Smith & Wesson was nearly bankrupt, and operational control of the company passed into the hands of Carl R. Hellstrom, a consulting engineer who had been hired as plant superintendent.  Hellstrom brought Smith & Wesson back from the brink, and his wartime and post-war management of the firm saw a renewed concentration on the manufacture of handguns, as well as an expansion of both the company's production facilities and its product line.

Although still located in Springfield, Massachusetts, Smith & Wesson has been a corporate subsidiary since 1965, when the Wesson family sold their interest to the Bangor Punta Corp.  During this period, the company expanded its product line to include a holsters and other firearms-related accessories, as well as riot control equipment and other items intended for use by law enforcement agencies.  In 1984, Bangor Punta was purchased by Lear Siegler Corp., which in turn was acquired by Forstmann Little & Co. in 1986.  The new owner was primarily interested in Lear Siegler's automotive and aerospace operations, and Smith & Wesson was sold to Tompkins P.L.C., a British holding corporation.

Under Tompkins ownership, Smith & Wesson continued as an innovative company. The firm expanded its line to include a new semi-auto pistol in the increasingly popular .40 S&W chambering, as well as their polymer Sigma Series pistols, which are available in a variety of calibers.  The company established a second manufacturing facility in Maine, and it invested heavily in computerized machine tools, robotics, and other state-of-the-art technology.  Smith & Wesson diversified into the manufacture of car parts, tools, and even golf clubs.  As an added source of revenue, the firm opened several retail stores, as well as catalog and Internet sales operations, which sold a number of non-firearms products branded with the highly-recognizable interlocking "S&W" trademark.

Unfortunately, these new products could not offset losses incurred by a decline in handgun sales, coupled with increasing costs associated with anti-gun lawsuits brought against the industry by a number of U.S. cities and by crime victims.  In March 2000, Smith & Wesson was the sole firearms manufacturer to sign on to a deal with the Clinton Administration which required the firm to comply with a number of dubious "safety" and marketing requirements; in return, S&W was dropped from government lawsuits.

Far from having the desired effect, Smith & Wesson faced immediate backlash from the gun-owning public in response to what was seen as a sell-out to anti-gun hysteria.  Sales plummeted as the shooting community spontaneously boycotted Smith & Wesson products.  As a result, the firm's management began to distance itself from this agreement.  At present, the agreement between S&W and the government has not gone into effect.

In May 2001, Tompkins sold Smith & Wesson to Saf-T-Hammer, an Arizona-based firearms safety and security firm.  The company's product line is focused is on preventing unauthorized gun use and unintentional firearms-related accidents, and its customers include firearms distributers, retailers, law enforcement agencies, and gunsmiths.