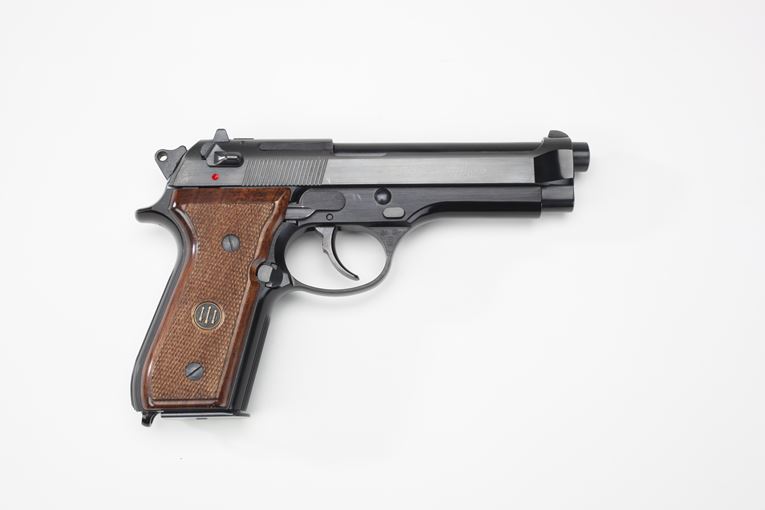 This commemorative semi-automatic pistol was one of 100 produced for the Texas Rangers and issued by seniority as determined by years of service. Issued to Sergeant Adolfo "Al" Cuellar, Co. D, Texas Rangers, headquartered in San Antonio, it is displayed along with Ranger Cuellar's Texas Ranger badge, which was made from a Mexican cinco peso silver coin. Also displayed are Ranger Cuellar's business card, as well as letters of authenticity from both Al Cuellar and from the Beretta factory in Brescia, Italy.


Fabbrica d'Armi Pietro Beretta S.p.A., the world's oldest gunmaking and industrial firm, has been producing firearms in northern Italy since since the days of Leonardo DaVinci and Christopher Colombus. Evidence suggests that Bartolomeo Beretta, a master barrel maker, operated an iron forge in the Val Trompia Valley as early as 1500. Beretta-manufactured arms were used by the Venetian Republic in its war with the Ottoman Turks in 1570, and after the region was occupied by France in 1797, the Berettas were awarded a "Good Service Certificate" from Napoleon Bonaparte for their part in supplying 40,000 muskets annually for the French Emperor's Grande Armee.

Over the past four hundred years, the company has produced every type of firearm from arquebusses to wheel lock and flintlock pistols to modern automatic rifles, semi-automatic pistols, and fine sporting arms, as well as machinery used in the manufacture of guns. Many arms from Beretta's early period survive in museums and private collections. During the 20th century, Beretta has furthered its reputation as a maker of high-quality shotguns. These range from simple but functional pump-action guns to highly embellished handcrafted presentation-grade pieces. The company continues to provide firearms for military and police forces, both in Italy and abroad. During the First World War, Beretta manufactured a blowback-operated 9mm semi-auto pistol chambered for the Glisenti cartridge.

This was followed by a .32 ACP version in 1922. Both of these pistols featured internal hammers, but later pistol designs featured an exposed hammer. Among these are the M1923, M1931, and Modello 1934, chambered for the 9mm Corto (.380 ACP), which became the standard sidearm of the Italian Army during the Second World War. Beretta is presently known as the manufacturer of the Model 92FS/ M9 9mm Parabellum semi-automatic combat pistol currently serving with U.S. and other armed forces and law enforcement agencies. Shotguns and pistols account for a large percentage of Beretta's sales, but the gunmaker has also manufactured submachine guns and battle rifles, including the 7.62 NATO caliber BM-59, a licensed copy of the famous M1 Garand which features a detachable box magazine.

The company's first submachine gun was produced in 1917 in a joint venture with Fiat. This dual-barreled 9mm Parabellum arm was capable of firing 3000 rounds per minute. This arm was ineffective, but it started Beretta on a path that has led to the production of .223 caliber M70 rifle and 9mm caliber M12 submachine gun. After nearly 500 years and sixteen generations, Fabrica d'Armi Pietro Beretta S.p.A. is still a family-operated business, headed by Ugo Gussalli Beretta and his sons, Pietro and Franco. Presently, Beretta manufactures a wide variety of custom firearms, pistols, shotguns, bolt-action and semi-automatic rifles, and military arms in state-of-the-art facilities in Brescia, Italy, and in other locations in Europe and the Americas. Beretta U.S.A. Corp. was founded in 1977 in Accokeek, Maryland, and the company has been manufacturing firearms at this location since that date.