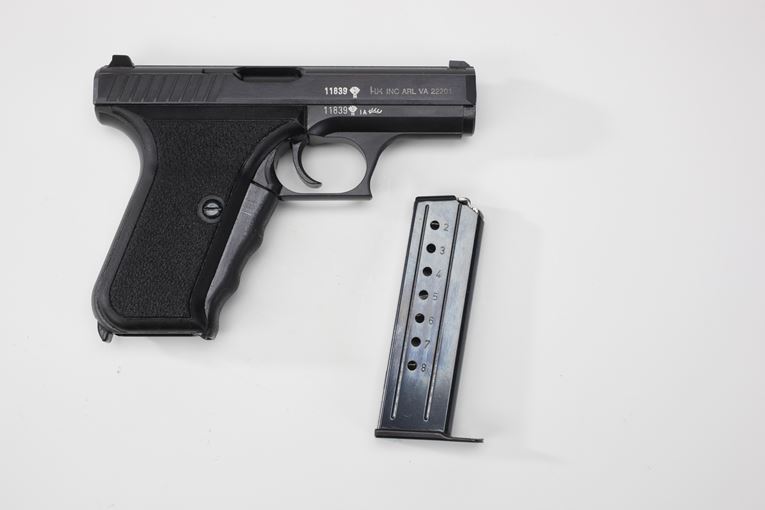 These single-action pistols employ a unique squeeze cocking grip feature. This is an earlier example of the P7M8 model produced by Heckler & Koch for European and American sales. This version does not have a heat shield common to the P7, but it does feature an ambidextrous magazine release.


Heckler & Koch, located in the Black Forest city of Oberndorf/Neckar, Germany, traces its origins to the Second World War. As the military fortunes of the Third Reich declined, German arms designers worked on a new rifle that might help reverse this tide. The result was the fully-automatic MP42, later redesignated StG (Sturmgewehr) 44, which was developed by the firm of C. G. Haenel. This rifle, chambered for the 7.92mm Kurz cartridge, featured metal stampings, a detachable curved magazine, and a simple wood stock and fore end. The StG44 was tested extensively in combat, primarily on the Russian Front. Although these arms performed well, their 11 pound weight proved to be a serious drawback in combat, and efforts were made to lighten the basic design.

In response to this problem, Mauser engineers produced the GeratO6(H), later designated StG45, which employed the locking rollers and delayed blowback features of the Wehrmacht's MG42 machine gun. The StG45 came too late to see much if any action. A modified version of this system was used in later H&K arms. Heckler & Koch was founded after the war by engineers Edmund Heckler, Theodor Koch, and Alex Seidel, all of whom had been part of the Mauser design team for the StG45. The company originally designed and manufactured precision machine tools, gauges, and components, and H&K's product line later expanded to include a military rifle based on the earlier Sturmgewehr design and chambered for 7.62mm cartridges. This design, which was later produced in Spain as the CETME rifle, was adopted by the Spanish government for use by its armed forces.

A West German-produced version, known as the G3, was later adopted by the Bundeswehr as its main battle rifle. The well-known Heckler & Koch MP5 is a submachine gun version of the G3 that has become famous through service with various military, police, and counter-terrorism units including the Federal Bureau of Investigation's Hostage Rescue Team, the U.S. Navy SEALs, and Britain's Special Air Service. Available with full-or folding buttstock and in 9mm, 10mm, and .40 S&W calibers, the MP5 features a roller-delayed blowback mechanism and fires from a closed bolt.

These guns are capable of both semi-automatic fire, 2-3 round bursts, and fully-automatic fire at a rate of 800 rounds per minute. Carbine and sub-carbine versions are also produced for use by special operations forces, security details, and air crews. Extraordinarily rugged, an MP5 used as a training gun by the security detail at the Kennedy Space Center fired an astounding 571,600 rounds over a six year period with only minor parts replacement. H&K produces other full-size military and military-style rifles and carbines including the HK 33 and its variants, which chamber the 5.56mm NATO cartridge and can be either belt- or box-magazine fed. The HK 94 fires a 9mm cartridge, while the larger semi-automatic HK 91 and HK 93 chamber the 5.56mm NATO and 7.62mm NATO cartridges respectively.

A more recent addition to the H&K family is the G36, a lightweight, rugged, and reliable gas-operated battle rifle/carbine. With the exception of the bolt, barrel, springs, and other small components, the G36 is made of carbon-fiber reinforced polymer. Like the earlier G3, the G36 has been adopted for use by the German Bundeswehr. Heckler & Koch firearms are produced in Germany, but the company also maintains an American subsidiary in Virginia. This operation consists of sales, training, and armorer staffs which aggressively target the U.S. military and law enforcement establishments as potential clients. H&K's market has expanded to include sporting and self-defense arms, and the experience gained through the production of military arms has been applied successfully to the manufacture of these products.

Following the P9S and VP-70 was the PSP, later designated the P7, a revolutionary 9mm pistol design which features a squeeze-cocker integrated into the front grip. These fully-ambidextrous pistols are cocked when the grip is squeezed with a force exceeding 14 pounds and remain cocked with as little as 4 pounds of pressure, and uncock when the grip is released. Unlike conventional double-action pistols, these pistols also feature a constant and uniform trigger pull from first shot to last. Although used by Germany's elite GSG-9 anti-terrorism unit, the P7 competed unsuccessfully in the U.S. military Joint Services Small Arms Program XM9 pistol trials, and has enjoyed only limited success in the United States.

As a result of the P7's inability to find acceptance with the U.S. military and law enforcement agencies, H&K set out to design a new pistol specifically for the American market. The result was the Universal Self-loading Pistol, or USP. These pistols employ a patented recoil reduction system, and are available in 9mm, 40 S&W, and .45 ACP calibers and in both standard- and compact-size frames. The USP features a reinforced polymer frame that is lighter than steel while having a greater tensile strength than aluminum while being resistant to wear, corrosion, and high temperatures. H&K produces nine different variants of the USP, including double- or single-action-only, DA/SA combo, and right- or left-handed safety/decocking lever versions.

In addition, the USP may be easily converted to any of these configurations. H&K found success in the U.S. military market with the Mark 23 Offensive Handgun Weapons System. This design is a direct outgrowth of both the military XM9 pistol trials and the USP project. Finding a 9mm handgun to be inadequate for certain tasks, the U.S. Special Operations Command (USSOCOM) undertook a series of pistol trials intended to select a .45 ACP caliber pistol for use by special operations units including Army Special Forces and Navy SEAL units. The Mark 23 Offensive Handgun Weapons System consists of three components: .45 pistol, laser sighting module, and suppressor, and is the first .45 ACP caliber pistol to be adopted for use by U.S. forces since the Colt M1911. Heckler & Koch has established a reputation for quality and innovation.

The company's Oberndorf factory features sophisticated automatic and semi-automatic turning and milling machines, and the company also makes extensive use of chemical, physical, and metallographic testing and analysis techniques. H&K's delayed roller-cam system provides symmetric energy distribution in which the bolt head transmits energy uniformly to the 2 locking rollers without rotation or tilt during movement. This provides a balanced, light function with minimized recoil forces and minimal wear of moving parts. Polygonal barrels, also an H&K feature, have rounded, square, or hexagonal profiles with no sharp edges, which provide both an effective gas seal and reduced barrel wear. In addition, cleaning is made easier. In 1991, Heckler & Koch was absorbed by Royal Ordnance, a division of British Aerospace.