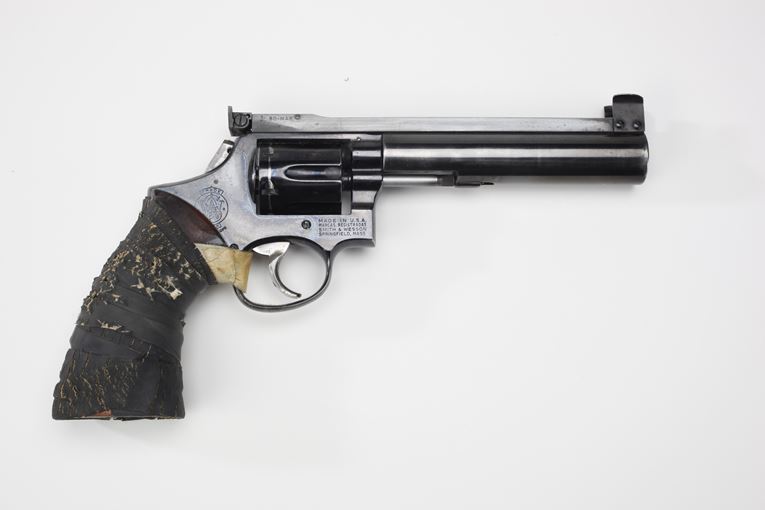 This Wesley Barksdale-modified revolver was used by Alabama State Trooper Sergeant James Collins in recording the first 1500 score in a 1978 registered match held at Jackson, Alabama. Sgt. Collins and his modified S&W won the 1977 NRA National Revolver Championships, and he also used this revolver in shooting a 1500 score on four occasions, including a registered match in which he scored 1500-126X.


Trooper Collins' Smith & Wesson K-frame Model 14-3 was modified by Wesley Barksdale of Center Point, Mississippi. Barksdale installed a Douglas air-gauge barrel, in which he used an experimental throating technique which prevented barrel leading when shooting hollow-base wadcutter ammunition. The custom cylinder latch is oversized to speed up the loading process. Also featured are a modified BoMar ramp sight with protective "wings" which were made by Sgt. Collins from M1 Garand clips.

These wings were cut and drilled into the ramp and served to protect the sights when the revolver was holstered. The front sight is oversized for neck shooting on the B-27 target. The action of this revolver was originally stock unmodified, but as Sgt. Collins switched to all-double action shooting, he removed excess weight from the hammer in hopes of reducing lock time and increasing accuracy. Over the course of its lifetime, Sgt. Collins fired over one million wadcutter rounds through this revolver.