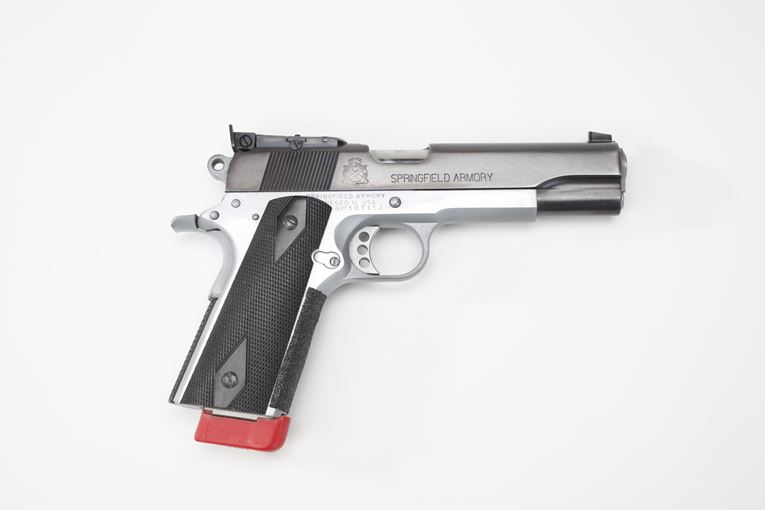 Custom competition/target pistol accurized by Alan Tanaka of AT Custom Gunworks of Gardena, CA. This pistol was used by Dwight Van Horn to win the Harry Reeves Trophy in 1993 with a national championship record score of 594x35. The shooter also used this pistol, the first made by Tanaka for police competition, to win his Police Distinguished badge.


The Harry Reeves Memorial Trophy is awarded to the winner of the NRA Police Semi-Automatic Service Pistol Match at the NRA National Police Shooting Championships. Harry Reeves died in Andrews, North Carolina on Feb 5, 2001. He was 90. Harry was probably the premier pistol shooter of his day. He won the National Pistol Championship six times. Harry's competitive shooting began in 1934 when, as a Marine corporal, he won the Navy Championship in the Navy Games. He continued to excel in Marine Corps competition until 1937, when he entered the Detroit Police Department.

In 1940, World War II brought him back into the Marine Corps, where he served until 1946. In 1946, he left active duty for the Marine Reserves and a return to the Detroit Police Department where he served until retirement as an inspector in 1964. It was as a Marine corporal in 1941 that Reeves became the first shooter to fire a score of 2600 or over in an NRA conventional "2700" tournament. His score was 2609, beating the old record of 2588. He won the final tournament of his career with a 2633 in 1964 and put his guns back in the box to retire as a winner.

He was a member of six world Championship and Olympic teams and won medals on most of them. He was the first to shoot a "possible" in registered competition when he fired a 200x200 in a timed-fire .22 cal. event. Under the national record rules, he continued to fire an additional shots and "cleaned" those also for a 300x300. This sampling of the shooting career of this amazing pistol shot shows that there was sufficient cause to establish the Harry Reeves Memorial Trophy at the National Police Shooting Championships.