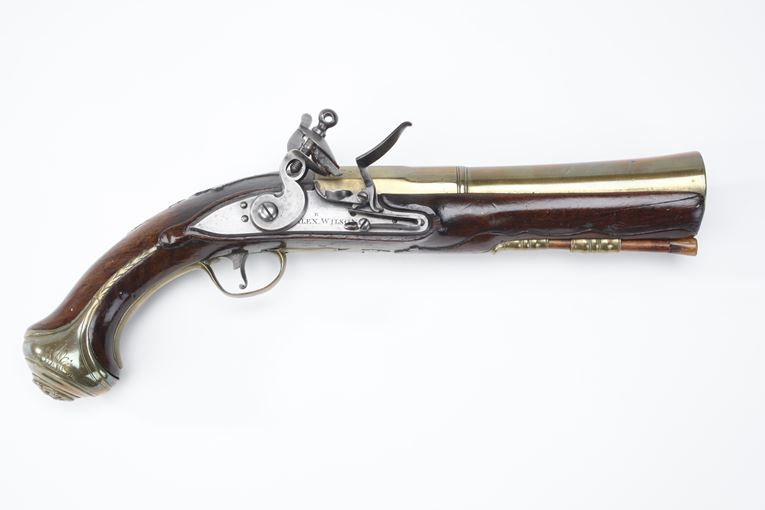 The blunderbuss, which takes its name from the German term Donderbuschse (thunder gun) is a short-barreled firearm with a flared muzzle that made its appearance in the late 16th century. Often associated with the Pilgrims, the blunderbuss was still relatively unknown in the early 17th century. Originally intended for military purposes, these arms can be traced to 1598, when Germany's Henrich Thielman applied for a patent for a shoulder arm designed for shipboard use to repel enemy boarders.

The blunderbuss quickly became popular with the Dutch and English navies. England's growing maritime power seems to have fueled production of these short bell-barrel arms, which were useful during close-in engagements between warships by enabling marines clinging to ship's rigging to use them against the gun crews of opposing vessels. The barrels and furniture of the blunderbuss were typically made from brass, and stocks were most commonly made from walnut.

Other, less robust woods were sometimes used, but their tendency to shatter ensured that walnut would remain in widespread use as a stocking material. Early examples were of utilitarian design and were lacking in adornment. These later gave way to examples that included simple engravings and scroll work. Even later specimens featured more artistic ornamentation in the form of classical and neo-classical figures, stands of weaponry, and acorn- or pineapple-shaped finials. Along practical lines, blunderbuss makers began to incorporate certain technical and safety innovations in their products. Among these were the introduction of a sliding safety catch behind the cock, checkered wrists which improved the shooter's grip, frizzen springs equipped with roller bearings, and the addition of a folding bayonet.

This last improvement, however never achieved a great degree of popularity. Barrels gradually became less massive, and cannon-type muzzles took their place alongside the longstanding trumpet-shaped variety. Late-production examples even featured percussion ignition systems. Blunderbuss pistols made an appearance during the latter part of the 17th century, but these massive arms frequently proved to be dangerous to those on both sides of the muzzle. One hundred years later, the blunderbuss pistol enjoyed a renaissance as skilled gunsmiths included ornate high-quality examples among their wares offered to wealthy clientele.

Although no more lethal than the flintlock pistols of the period, highly adorned blunderbuss pistols, which were smaller than their predecessors of the previous century, were popularized among the well-heeled as a result of the craftsmanship of artisans such as London gunsmith Joseph Heylin. The blunderbuss played a role during the English Civil War of 1642-48, and these arms were widely used as a personal defense arm in England during the Commonwealth Period.

The lack of an organized system of law enforcement at that time, coupled with the growing threat posed by highwaymen, placed the burden of protecting life and property in the hands of honest citizens. Although some blunderbusses bore the royal cipher of the Sovereign, they typically did not feature the Broad Arrow identifying government ownership or the markings of the Board of Ordnance. This would indicate that blunderbusses were not formally adopted for use by British land forces, but they were quite likely to have seen use in the hands of military guards and for crowd control.

Several brass- and iron-barreled blunderbusses were captured from the forces of Lord Cornwallis upon the latter's surrender to the Continental Army at Yorktown, Virginia in the final land campaign of the American Revolution. As the 18th century dawned, the establishment and operation of commercial businesses became more closely associated with urban areas. This in turn gave rise to improvements in the transportation system throughout England, as turnpikes and toll booths replaced the isolated and often rough byways that had previously linked the towns of the realm. Highway robbery continued to be a problem, and both travelers and toll collectors were well-advised to arm themselves against thieves and other bandits.

Equally effective from horseback or coach seat, the blunderbuss was especially well-suited to the times, and many Englishmen adopted them for their personal protection. Royal Mail coaches typically carried both a driver and a guard who was armed with a blunderbuss and a brace of pistols. By 1750, England established her first effective police force. Equipped with an arsenal that most likely included the blunderbuss, these officers of the law were largely successful in putting an end to the reign of the highwaymen.

Although these predators had become a thing of the past, encounters with wildlife poachers in rural areas required game wardens to be suitably armed. Urban crime remained a problem, and the blunderbuss continued to serve as a defense against the criminal element and as a tool to put down rebellion fueled by the increase in industrialization and its accompanying growth in urban slums. Political unrest in Ireland also was on the increase. These factors ensured the continued use of the blunderbuss into the 19th century. After reaching its peak usage in the early 1800s, the blunderbuss rapidly went into decline, becoming extinct by mid-century.

Domestic unrest decreased and law enforcement agencies became increasingly efficient during the Victorian Age. Armed rebellion and highwayman had become things of the past, and the blunderbuss had seemingly outlived its usefulness. Nonetheless, these arms manages to hold on for a time until they were finally doomed not by the decline in lawlessness, but by the introduction of modern technologies that produced the revolving pistol and other repeating arms that were far superior to the blunderbuss for use in defensive situations.