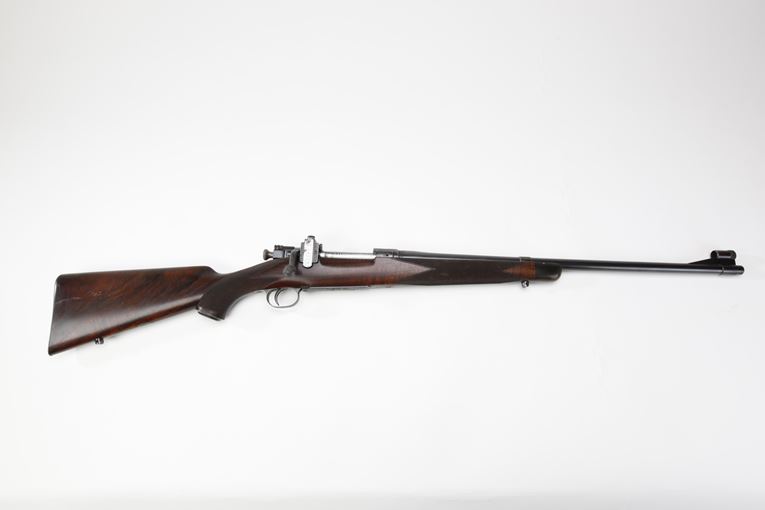 This custom rifle, designed for noted sportsman and competitive shooter Col. Edward C. "Jim" Crossman, is built on a U.S./Springfield Model 1903 action. Among its features are an elaborately-engraved receiver, barrel, bolt handle, and scope mounts, as well as a cheek piece stock with hand checkering on the wrist and fore end.


The firm of Griffin & Howe is a relative newcomer to the field of fine sporting arms. Unlike their English predecessors, whose business histories may span centuries, this New York company had its beginning in post-First World War New York City. Colonel Townsend Whelen, a noted military officer, shooter, and writer, met gunsmith James V. Howe when both worked at the U.S. Army's Frankfort Arsenal. Another of Whelen's friends was Seymour Griffin, a cabinetmaker and gun enthusiast who had turned his talents to custom stockwork. Whelen suggested that these two should consider going into business to feed the growing U.S. market for custom sporting arms.

Along with several other businessmen, Griffin and Howe did just that, establishing their business in May 1923. In addition to custom gunsmithing services, the new company specialized in "sporterizing" Springfield and Mauser military bolt-action rifles. Within a few months, James Howe left the firm to work for Hoffman Arms in Cleveland, Ohio, and Seymour Griffin was left in need of a skilled gunsmith. He was able to fill this need, thanks to a large number of European-trained craftsmen who were emigrating to the United States during this period.

Another addition to the company's staff was Seymour Griffin's new business partner. James L. Hobbs joined the firm just before the onset of the Great Depression, and for a short time, Griffin & Howe became Griffin & Hobbs. The economic collapse bankrupted many companies and drove others to the brink of ruin. Griffin & Hobbs was one of the latter, and the company managed to survive even though its business base had all but evaporated. In September 1930, Griffin & Hobbs merged with noted outdoor outfitters Abercrombie & Fitch.

Since the firm had established a reputation under the names of the founding partners, James S. Cobb, president of A&F, suggested that the gunmaker revert to its original name. After Seymour Griffin's retirement in 1958, the firm became a wholly-owned subsidiary of Abercrombie & Fitch. Prior to A&F's final demise in 1977, two employees purchased Griffin & Howe from the failing mercantile firm. True to its origins, Griffin & Howe continues to build custom rifles based on Mauser-style actions, including the pre-1964 Winchester Model 70 design. In addition to its .30-Ô06 caliber sporting arms, the company produces rifles in chamberings ranging from .22 long rifle to big game calibers.

Griffin & Howe arms are available in a variety of configurations and with options including elaborate custom engraving. The firm also offers lever-operated side scope mounts that allow telescopic sights to be removed and remounted quickly without loss of zero. In addition to its Manhattan showroom, Griffin & Howe also operates a second sales outlet in nearby Bernardsville, New Jersey. Both locations feature the company's own products, as well as a wide assortment of fine English, American, and European shotguns and rifles.

The New York facility affords purchasers from around the world the opportunity to examine potential purchases of collectible arms through a state-of-the-art video imaging system that permits detailed examination of details such as inlays and engravings. The Bernardsville shop also houses Griffin & Howe's manufacturing and repair facilities. Here customers can examine a wide selection of wood for either new or re-stocked firearms, while skilled craftsmen both repair classic guns and build new ones. Shooters may also elect to attend the firm's shooting school in New York state, where they can be fitted for their custom purchase.