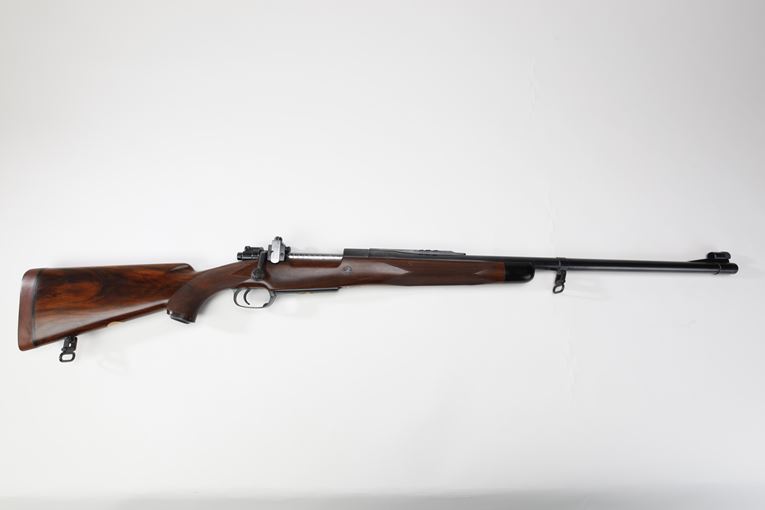 The firm of Griffin & Howe is a relative newcomer to the field of fine sporting arms. Unlike their English predecessors, whose business histories may span centuries, this New York company had its beginning in post-First World War New York City. Colonel Townsend Whelen, a noted military officer, shooter, and writer, met gunsmith James V. Howe when both worked at the U.S. Army's Frankfort Arsenal.

Another of Whelen's friends was Seymour Griffin, a cabinetmaker and gun enthusiast who had turned his talents to custom stockwork. Whelen suggested that these two should consider going into business to feed the growing U.S. market for custom sporting arms. Along with several other businessmen, Griffin and Howe did just that, establishing their business in May 1923. In addition to custom gunsmithing services, the new company specialized in "sporterizing" Springfield and Mauser military bolt-action rifles. Within a few months, James Howe left the firm to work for Hoffman Arms in Cleveland, Ohio, and Seymour Griffin was left in need of a skilled gunsmith.

He was able to fill this need, thanks to a large number of European-trained craftsmen who were emigrating to the United States during this period. Another addition to the company's staff was Seymour Griffin's new business partner. James L. Hobbs joined the firm just before the onset of the Great Depression, and for a short time, Griffin & Howe became Griffin & Hobbs. The economic collapse bankrupted many companies and drove others to the brink of ruin. Griffin & Hobbs was one of the latter, and the company managed to survive even though its business base had all but evaporated.

In September 1930, Griffin & Hobbs merged with noted outdoor outfitters Abercrombie & Fitch. Since the firm had established a reputation under the names of the founding partners, James S. Cobb, president of A&F, suggested that the gunmaker revert to its original name. After Seymour Griffin's retirement in 1958, the firm became a wholly-owned subsidiary of Abercrombie & Fitch. Prior to A&F's final demise in 1977, two employees purchased Griffin & Howe from the failing mercantile firm. True to its origins, Griffin & Howe continues to build custom rifles based on Mauser-style actions, including the pre-1964 Winchester Model 70 design. In addition to its .30-Ô06 caliber sporting arms, the company produces rifles in chamberings ranging from .22 long rifle to big game calibers.

Griffin & Howe arms are available in a variety of configurations and with options including elaborate custom engraving. The firm also offers lever-operated side scope mounts that allow telescopic sights to be removed and remounted quickly without loss of zero. In addition to its Manhattan showroom, Griffin & Howe also operates a second sales outlet in nearby Bernardsville, New Jersey. Both locations feature the company's own products, as well as a wide assortment of fine English, American, and European shotguns and rifles. The New York facility affords purchasers from around the world the opportunity to examine potential purchases of collectible arms through a state-of-the-art video imaging system that permits detailed examination of details such as inlays and engravings. The Bernardsville shop also houses Griffin & Howe's manufacturing and repair facilities.

Here customers can examine a wide selection of wood for either new or re-stocked firearms, while skilled craftsmen both repair classic guns and build new ones. Shooters may also elect to attend the firm's shooting school in New York state, where they can be fitted for their custom purchase. - - Peter Paul Mauser, the inventor of the Mauser bolt-action rifle and the youngest of thirteen children, was born on June 27, 1838 in Oberndorf, Germany. His father, Andreas Mauser, had worked as a master gunsmith in a government firearms factory which was located in the town, and six of his sons, including Paul, were trained in this craft. Paul Mauser showed a natural gift for improving existing work methods and developing new ones, as well as for designing new tools that would enable him to work more efficiently.

Paul was later assigned to duty as an artilleryman at the arsenal at Ludwigsburg, where he closely studied models of breechloading guns. He later credited this period in his life as influential in the development of his breechloading system for small arms. By 1859, he had left the army and returned to work at the Royal Firearms Factory in Oberndorf. Along with his older brother, Wilhelm, he devoted his free time to the development of new types of firearms. Wilhelm handled the business aspects of this venture, while Paul handled technical work. The Mauser brothers' first invention was a small breechloading cannon, along with the special ammunition developed specifically for use in this gun.

Aside from the initial example, this gun was not produced due to difficulties in production and the limited potential for profit. The two also worked to improve the operation of the Dreyse Needle Gun which was then widely used by German military units. These rifles, designed by Nicholas Dreyse, employed a locking mechanism based on a turning bolt system. Using this idea as a starting point, Paul Mauser developed a system in which a cam action opened and closed the action and cocked the mainspring. Wilhelm was impressed with his brother's design, and he successfully presented it to government and military officials. As a result, the Mausers were given funding for additional development work and for the purchase of machinery.

Unfortunately, however, senior military officers saw no need to abandon recently-acquired and very adequate rifles for this new design, even though it was superior to existing arms. Undaunted, Wilhelm and Paul took their rifle to the Austrian ambassador. Although Austria had also made large financial commitments to purchase new arms and was thus unable to convert to the Mauser, the design met with considerable enthusiasm. The gun was sent to Vienna for testing, and it was there that the Mauser design came to the attention of Charles Norris, who was a representative of the E. Remington & Sons, a noted American manufacturer of firearms.

On December 2, 1871, the Mauser, officially designated Infantry Rifle Model 71, was officially adopted by the Prussian government, thus becoming the first bolt-action metallic cartridge rifle to enter German military service. The brothers set up a temporary workshop in their home town and began production to fulfill a military contract for the new rifle. Soon, however, they expanded their operations to keep up with increased orders from other German states, as well as from foreign governments. The firm eventually purchased the royal arms factory at Oberndorf, where several members of the Mauser family had been employed.

Meanwhile, Paul continued to experiment with further improvements to his design. These efforts resulted in the development of a repeating rifle, designated the Infantry Rifle Model 71/84, which was officially adopted by the army of Kaiser Wilhelm I on January 31, 1884. In April of that year, the company became Waffenfabrik Mauser, a stock company. In addition to their own production, Mauser rifles were also manufactured by various government arsenals under a royalty agreement. The company was unsuccessful in its attempts to secure adoption of its rifles by Britain, but in February, 1887, with the help of the Berlin firm of Ludwig Loewe & Co., Mauser also received a contract from the Turkish government for 500,000 9.5mm rifles and an additional 50,000 carbines.

In response to France's adoption of the Lebel 7.9mm smokeless cartridge rifle in 1886, Germany and other nations followed suit. Paul Mauser's preoccupation with the Turkish contract prevented his participation in the development of a new German service rifle. Mauser introduced a 7.65mm smokeless cartridge rifle in 1888 for Belgian military tests. This rifle, designated the Model 89, was adopted by Belgium, and sales were also made to Spain, Turkey, and to several South American countries. Mauser continued to improve his design, with the Model 92 and Model 95 rifles as the result of his efforts, but his greatest success came with the Model 98.

Mauser patents have also served as a platform for other bolt-action rifles, including the U.S./Springfield Model 1903 military rifle. The Model 98 is still manufactured today, and many former military models have been sporterized. In addition to his rifle designs, Paul Mauser is also known for the famous Model 1896 "Broomhandle" semi-automatic pistol and pistol-carbine, the HSc semi-automatic pistol, and various pocket pistols.