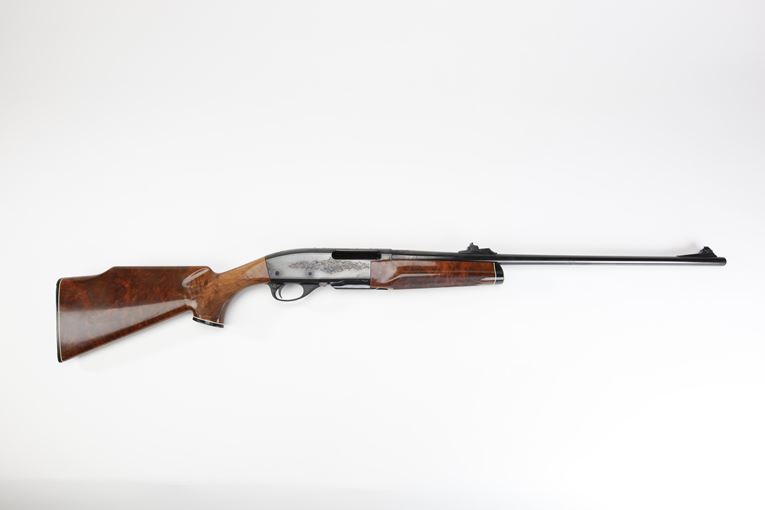 
1981 Remington (U.S.) Model 6 Slide-Action Detachable Magazine Rifle (repeater/ breech-loading/ smokeless powder/ cartridge ammunition) The Remington Model 6 slide-action became a collector's item when it was discontinued in 1987, six years after its issue. At the time its price ranged from $439 to $7,079. Very similar in price range to the Remington Model 4 Semi-automatic, its discontinuance so soon after issue raises many questions about the contemporary economic climate in America. Probably inflation played an early role, depending on the time lag between design and production.

Through the late 70s, inflation was so rapid that designers and planners found it difficult to predict how much a finished product would cost. For this reason, many arms firms pulled back, even when inflation came under control. Thus, it may be seen that a predictable market is essential to producing a profitable product. --Dr. William L. Roberts, THE AMERICAN LIBERTY COLLECTION; #186 Eliphalet Remington II was born in Suffield, Connecticut on October 28, 1793.

His father, Eliphalet Remington, moved his family from Connecticut to the Mohawk River Valley in 1800, where he cleared enough land for a small farm, built a two-room cabin that was later replaced by a larger home, and, along with others who had also moved to the region from Connecticut, established the town of Litchfield. Eliphalet Remington Sr. also owned an iron forge. Here he both fabricated and repaired tools, equipment, and hardware, and Lite, as Eliphalet II was nicknamed, worked alongside him and learned the trade as well.

The younger Remington had the opportunity to examine various long arms that were owned by local residents, and in 1816, he decided that he was capable of manufacturing a good rifle barrel. This he proceeded to do, and he took the finished product to a local gunsmith for boring and rifling. Lite then fitted a lock, stock, and furniture, and upon completion, he found that it shot well.

In addition to the M1911 semi-automatic pistol, the Browning Model 1917 heavy machine gun, and the Model 1917 bolt-action rifle, Remington also manufactured the Pedersen device. This was an early attempt to increase the firepower of individual infantry troops armed with the Springfield Model 1903 rifle. These rifles were modified by cutting the receiver wall to accommodate an ejection port, and the replacement of the bolt with a semi-automatic assembly that accepted a 40-round stick magazine loaded with the .30 caliber Pedersen, a pistol-class cartridge.