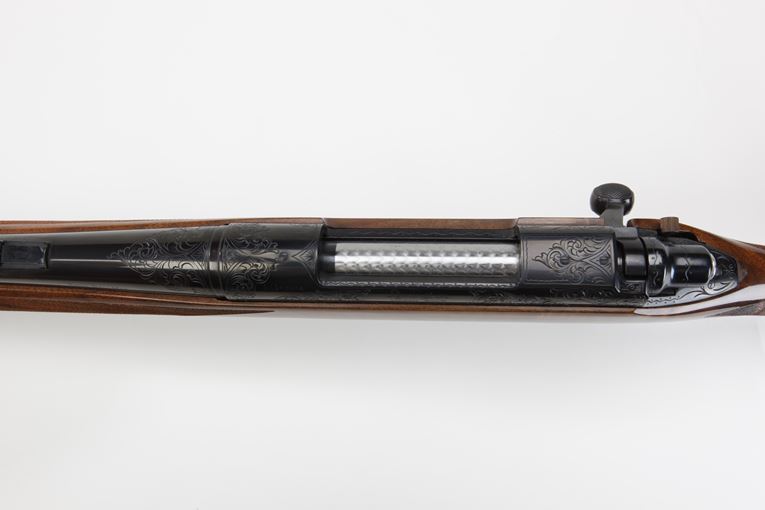 This deluxe rifle features an engraved barrel, receiver, and floorplate. SN B-6340664


1962 Remington (U.S.) Model 700 Bolt-Action Box-Magazine Rifle (repeater/ breech-loading/ smokeless powder/ cartridge ammunition) The Remington 700 is another rifle of the early 1960s that can handle magnum (.458 Winchester and other) rounds. Included in the evolutionary types of the 700 are 'Mountain Rifle', 'Safari Rifle', 'Classic', etc. With this sort of variety being offered by volume manufacturers, there is little wonder that custom firearms-making in North America never achieved the prominance it has in Europe. Also, most Americans tend to think of firearms as utility tools for hunting, target shooting, commerce, and self-protection.

In Europe, however, they are often thought of as an art form. Europeans are willing to pay extra for the art provided by their custom gun makers. Americans prefer to reach for a Remington. --Dr. William L. Roberts, THE AMERICAN LIBERTY COLLECTION; #156 Eliphalet Remington II was born in Suffield, Connecticut on October 28, 1793. His father, Eliphalet Remington, moved his family from Connecticut to the Mohawk River Valley in 1800, where he cleared enough land for a small farm, built a two-room cabin that was later replaced by a larger home, and, along with others who had also moved to the region from Connecticut, established the town of Litchfield. Eliphalet Remington Sr. also owned an iron forge.

Here he both fabricated and repaired tools, equipment, and hardware, and Lite, as Eliphalet II was nicknamed, worked alongside him and learned the trade as well. The younger Remington had the opportunity to examine various long arms that were owned by local residents, and in 1816, he decided that he was capable of manufacturing a good rifle barrel. This he proceeded to do, and he took the finished product to a local gunsmith for boring and rifling. Lite then fitted a lock, stock, and furniture, and upon completion, he found that it shot well. After showing his new gun to area residents, he soon had a large number of orders for gun barrels.

These were octagonal in shape, and as with his initial effort, boring and rifling was done by a gunsmith in nearby Utica. The completion of the Erie Canal in 1825 and the establishment of railroads soon thereafter provided an economic boost to the region. Remington's rifle barrel works expanded as well. By 1828, he had established his own forge in Ilion, and he soon came to dominate the local trade, producing over 8,000 barrels per year for gunsmiths who would do final rifling and fitting.

Over 65,000 Pedersen devices were manufactured, but most were scrapped after the war. During the Second World War, Remington manufactured the M1903 (Modified) rifle, a transitional long arm in which stamped parts replaced some that had been milled in the earlier model, while other parts were dispensed with altogether in the interests of reducing production time. The company also manufactured the redesigned M1903A3 battle rifle and M1903A4 sniper rifle.