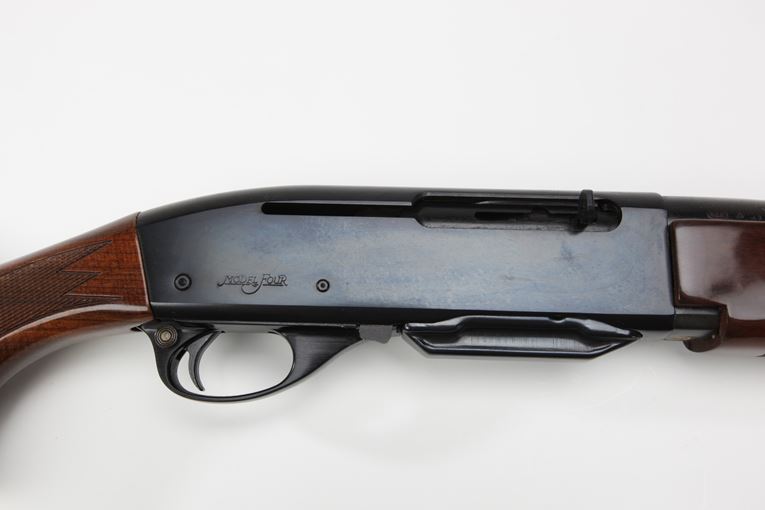 This design was discontinued after only three years of production due to an unstable U.S. economy.


1982 Remington (U.S.) Model Four Semi-automatic Detachable Magazine Rifle (repeater/ breech-loading/ smokeless powder/ cartridge ammunition) Issued in 1982 and discontinued in 1984, the Model Four utilizes a semi-automatic gas-operated action which loads but does not fire each round. As standard with all Remingtons, it had a wide range of available options and grades ranging from 'D-Peerless' to 'F-Premier' ($2,291 to $7,079 in 1985). The gun is equipped with a Monte Carlo stock and fore end. Its barrel tapers down slightly from breech to muzzle. Its action is fed by a four round detachable magazine.

Again, this firearm's history illustrates that many contemporary arms have become collector's items very quickly. The major cause for this circumstance seems to have been a lack of predictable cost projections during the late 1970s which had a detrimental effect on manufacturing and sales. --Dr. William L. Roberts, THE AMERICAN LIBERTY COLLECTION; #188 Eliphalet Remington II was born in Suffield, Connecticut on October 28, 1793. His father, Eliphalet Remington, moved his family from Connecticut to the Mohawk River Valley in 1800, where he cleared enough land for a small farm, built a two-room cabin that was later replaced by a larger home, and, along with others who had also moved to the region from Connecticut, established the town of Litchfield.

Eliphalet Remington Sr. also owned an iron forge. Here he both fabricated and repaired tools, equipment, and hardware, and Lite, as Eliphalet II was nicknamed, worked alongside him and learned the trade as well. The younger Remington had the opportunity to examine various long arms that were owned by local residents, and in 1816, he decided that he was capable of manufacturing a good rifle barrel. This he proceeded to do, and he took the finished product to a local gunsmith for boring and rifling. Lite then fitted a lock, stock, and furniture, and upon completion, he found that it shot well. After showing his new gun to area residents, he soon had a large number of orders for gun barrels. These were octagonal in shape, and as with his initial effort, boring and rifling was done by a gunsmith in nearby Utica.