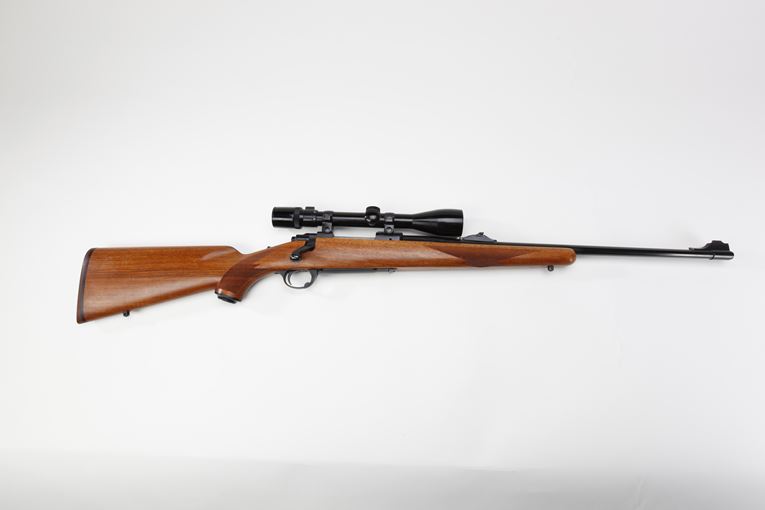 Ruger's Model 77 rifle was first offered in 1968 and this example is a first year of production piece. This refined Mauser-type action rifle can be chambered in both small and big game calibers. SN 407

Although his company encountered severe financial difficulties, Ruger continued with this project, and eventually received a U.S. patent for his work. In 1949, Ruger formed a partnership with Alexander Sturm, an artist, author, and firearms collector. Sturm provided the capital, Ruger his patent, and the two entrepreneurs began to produce and market their semi-auto pistol. This gun, with its red eagle crest medallion on the grip panels, met with favor among both shooters and dealers, and its design allowed it to be manufactured less expensively than the competing Colt Woodsman. Sturm, Ruger & Co. quickly became a financial success.

Over the years, this gun has been offered in various configurations including a military training version, but after a 50 year production run that has seen the production of over 2 million pistols, the popular Sturm Ruger .22 semi-auto remains basically unchanged. In 1951, Alexander Sturm died, and Bill Ruger changed the color of the company's grip panel medallion from red to black. The company continued its operations, and in 1953, Sturm, Ruger & Co. began to market a single-action revolver, first in .22 caliber, and later in larger centerfire chamberings, including .44 Magnum caliber. These guns were also a success, and they gained a reputation for quality and reliability. Beginning in 1973, the company introduced the New Model single-action revolvers, which employed a transfer bar safety mechanism similar to that used in double-action models. This feature prevents accidental discharge if the gun is dropped, thus allowing these revolvers to be carried safely with six rounds in the cylinder.

In addition to its firearms manufacturing activities, Sturm, Ruger & Co. also is the largest producer and user of investment castings in the industry. The investment casting process allows parts to be manufactured with a minimum of machining, but without sacrificing strength. These parts also help to keep production costs down, a savings which is passed along to the consumer. Pine Tree Castings, the company's Newport, New Hampshire subsidiary, was founded in 1963 to provide investment castings for its parent company. This precision facility also manufactures castings for other uses, including titanium golf clubs, brake rotors, and medical implants.

In 1991, Sturm, Ruger & Co. ceased its manufacturing operations in Southport. The company's offices remained there, but rifle and shotgun production moved to Newport, New Hampshire, and pistol production was relocated to Prescott, Arizona. The company's success over the last half-century has been due to a combination of factors. Among these are an ability to identify the diverse needs and desires of the shooting community, including police and military end-users as well as sportsmen, designs that fill these needs, and extensive use of modern technology to allow high-quality firearms to be manufactured inexpensively. From its humble beginnings in Southport, Sturm, Ruger & Co., has grown to employ over 2,000 workers in its various manufacturing and administrative facilities in Connecticut, New Hampshire, and Arizona.