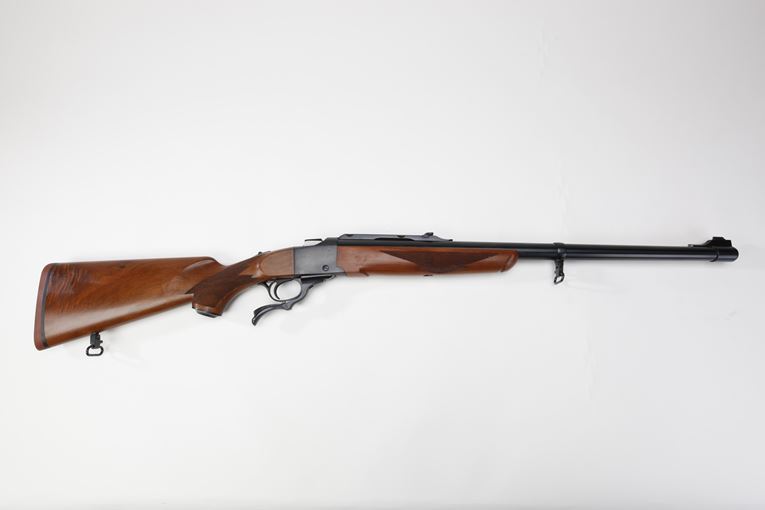 These single-shot lever-action rifles are popular with some daring big game hunters. SN 31-48039 The Ruger No. 1 single-shot rifle has been produced in calibers ranging from the .218 Bee to the powerful .458 Winchester Magnum.


1976 Sturm, Ruger & Co. (U.S.) No. 1 Lever-Action Falling-Block Rifle (single-shot/ breech-loading/ smokeless powder/ cartridge ammunition) Some people prefer not to hunt animals that hunt people. Polar bears, brown bears, lions, and tigers, as examples, actively hunt whatever they are able to kill. For this reason, the most daring of hunters have denied themselves second-shot capability when stalking such game.

This Ruger is produced for these hunters. Continuing a long line of single-shot, large-bore lever-action falling-block rifles, this gun is chambered for a single .458 Winchester magnum cartridge. Each time the gun is fired, the spent cartridge must be ejected and a new round loaded through the use of the lever, and new aim must be taken. Such sport is not for faint-hearted people, especially if they lack dexterity. For these unlucky hunters, semi-automatic guns in large calibers are recommended. --Dr. William L. Roberts, THE AMERICAN LIBERTY COLLECTION; #178 The Ruger No.1 rifle, introduced to the market in September, 1966, is a revival of the classic type of single shot big game rifle that had not been produced since shortly after World War I.

The Winchester Model 1885, the last of such rifles in production by a major manufacturer, was discontinued in 1920. While the Ruger No.1 resembles the strong and handsome Farquharson rifle in general appearance and its use of an under-lever falling-block action, it is not a replica of any earlier design. The popularity and success of the Ruger No.1 was very likely an incentive for the re-appearance in reproduction form of such rifles as the Sharps-Borchardt, Remington rolling block and the Winchester single shot rifles.