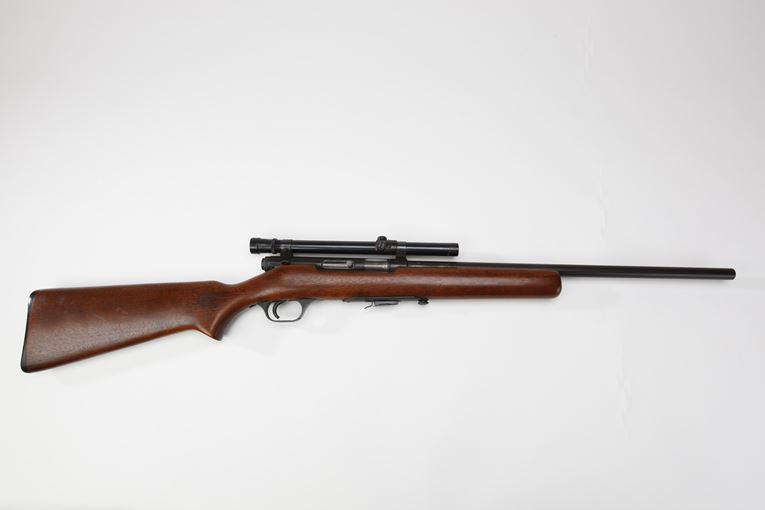 This experimental slam-fire design does not employ a movable firing pin. SN: none

In November of that year, he filed a second patent application for a simplified one-piece breech mechanism with a longitudinal hole to accommodate the passage of cartridges from the magazine to the chamber. Savage later abandoned the Martini action in favor of his own hammerless lever-action design, which featured a downward-tilting breechblock and rotary-spool magazine. His initial patent application was filed on April 10, 1889, but no models were produced until 1892, when a group of businessmen in Utica, New York agreed to back the development of a rotary-magazine rifle.

Savage filed two additional patent applications in February, 1892; the first of which was for a .30-40 military rifle, and the second for a smaller sporting arm. The Savage military rifle was submitted to the Army's 1892 Ordnance trials, where it was rejected in favor of the bolt-action Krag-Jorgensen rifle. Savage turned his efforts to his civilian sporter design, which became the Model 1895 Savage rifle.

The Savage Repeating Arms Company was formed in Utica in April 1894, and was reorganized as the Savage Arms Company in 1897, with Arthur Savage serving as general manager. The Model 1895 rifle was produced by John Marlin, and .303 Savage ammunition was manufactured by Union Metallic Cartridge. In 1899, Arthur Savage received a patent for an improved cocking indicator, and this feature became standard in the Model 1899 Savage Rifle. The Model 99 is still manufactured today in a variety of calibers and features, with production totals of more than one million. Significantly, no major changes have been made to Arthur Savage's original design.

Arthur Savage continued as the firm's general manager until 1915, when Savage Arms Co. was sold to Driggs-Seabury Corporation. In 1917, the company's name was changed to Savage Arms Corporation. During the First World War, Savage's manufacturing facilities were turned to the manufacture of Lewis machine guns, and the production of civilian sporting arms was resumed in 1919. Arthur Savage retired to San Diego, California, where he became the first manufacturer of automobile tires west of the Mississippi River.

Savage Arms relocated to Chicopee Falls, Massachusetts in 1946 and began a close association with J. Stevens Arms Co. Savage later became a division of American Hardware Corporation until it was sold by its parent company in 1981. Since 1989, the firm has been known as Savage Arms Incorporated. In addition to the Model 99, Savage's product line includes a variety of inexpensive rifles and shotguns.