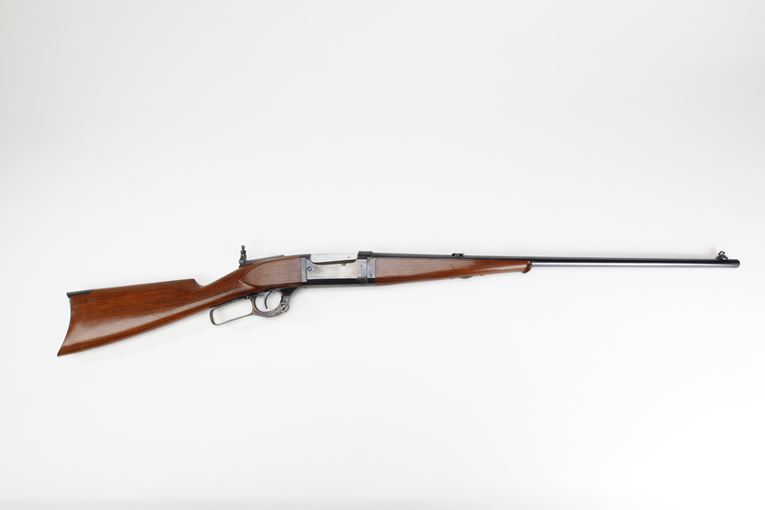 Available in many calibers, variations, and styles, the Savage Model 1899 is an improved, vastly-superior version of the earlier Model 1895 lever-action rifle.


Savage (U.S.) Model 1899 Lever-Action Tube Magazine Rifle (repeater/ breech-loading/ smokeless powder/ cartridge ammunition) By the turn of the century, Savage Repeating Arms Company was producing its own firearms in Utica, New York. Invented by A. W. Savage, these lever-actions were hammerless and could fire military rounds.

As the new century dawned, North America was a restless continent. Raids by Mexican bandits were disturbing the peace along the Texas and Arizona borders. Gold rush fever in Canada and Alaska burned brightly as Dawson City, the capital of the Yukon Territory, and Nome, western-most outpost of U.S. power, were consumed by rabid miners. This rifle reflects these events. Mexico, Canada, and the United States were exciting places to be. --Dr. William L. Roberts, THE AMERICAN LIBERTY COLLECTION; #116 Arthur William Savage (1857 - 1938), a native of Kingston, Jamaica, set out to design a repeating rifle based on the British Martini-Henry single-shot breechloader.

In the process, he founded an internationally-known arms corporation that bears his name. After holding jobs as a graphic artist in London, cattle rancher in Australia, and coffee plantation manager in Jamaica, Savage moved to New York City, where, in June 1877, he filed a patent application for a repeating rifle with a two-piece pivoting breechblock and a tubular magazine located in the buttstock.

Early in the 20th century, Savage Arms diversified its product line with the introduction of the Model 1907 Auto Pistol. This .32 caliber handgun was based on the design of Elbert H. Searles and went on to enjoy great success, thanks in part to endorsements from well-known shooters such as "Buffalo Bill" Cody, "Bat" Masterson, and detectives William A. Pinkerton and William T. Burns. A .45 caliber version competed unsuccessfully against Colt's .45 auto pistol in U.S. Army trials. During this period, Savage also introduced a pump-action rifle and a single-shot bolt-action rifle, both in .22 caliber.

During the First World War, Savage's manufacturing facilities were turned to the manufacture of Lewis machine guns, and the production of civilian sporting arms was resumed in 1919. Arthur Savage retired to San Diego, California, where he became the first manufacturer of automobile tires west of the Mississippi River. Savage Arms relocated to Chicopee Falls, Massachusetts in 1946 and began a close association with J. Stevens Arms Co. Savage later became a division of American Hardware Corporation until it was sold by its parent company in 1981.

Since 1989, the firm has been known as Savage Arms Incorporated. In addition to the Model 99, Savage's product line includes a variety of inexpensive rifles and shotguns.