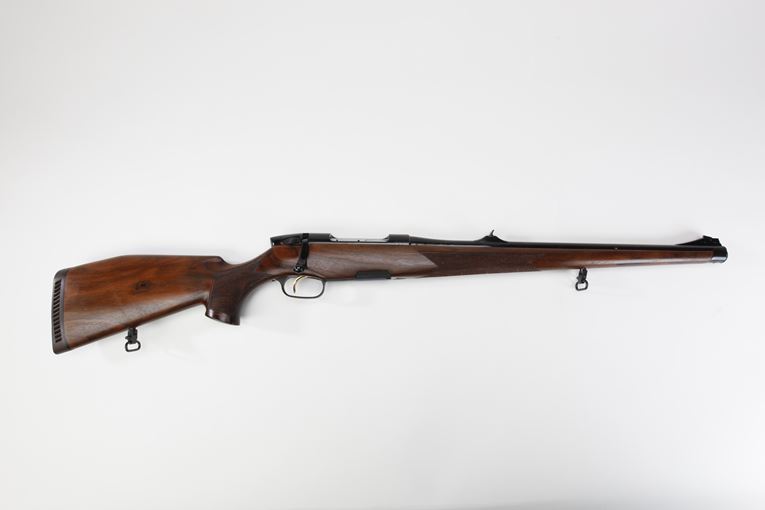 
1972 Mannlicher (Austria) Model M-Luxus Bolt-Action Detachable Magazine Rifle (repeater/ breech-loading/ smokeless powder/ cartridge ammunition) Imported into Canada, this Model M-Luxus is a classic Mannlicher, having a full stock and straight magazine. This basic arm has been around for about 90 years, yet is has been updated, refined, and improved over time. It represents the concept that anything that is truly well designed will be appreciated and used for as long as its function is needed.

A paradox between European culture and those of Canada and the United States is that the former will accept new firearms technologies more readily than the latter while continuing to revere older functional technologies. --Dr. William L. Roberts, THE AMERICAN LIBERTY COLLECTION; #170 The Mannlicher-Schoenauer rifle action was developed at the Austrian Arms Factory at Steyr, Austria in 1900. Named for its inventors, Ferdinand Ritter von Mannlicher and Otto Schoenauer, these actions incorporate a number of features that were revolutionary at the time of their introduction.

Mannlicher, one of the world's foremost arms inventors, was born in Mainz, Germany in 1848, and before his death in 1904, he had developed the clip-loading magazine system and the straight-pull rifle action, as well as several automatic rifles and pistols which were patented on both sides of the Atlantic. Otto Schoenauer, a native-born Austrian, served for a number of years as the director of the Austrian Arms Factory and is remembered as the inventor of the rotary magazine used in the Mannlicher-Schoenauer rifle. Schoenauer was not the originator of the rotary magazine concept, but he had been working with this system since 1885 and perfected his design near the turn of the century. This magazine was originally incorporated into Mannlicher's .43 caliber turn-bolt rifle in 1887, and one year later, it was used in the Mannlicher straight-pull rifle.

The Austrian Arms Factory developed the Mannlicher-Schoenauer rifle in 1900, using Mannlicher's receiver and bolt design, coupled with a 5-round Schoenauer spring-tensioned rotary-spool box magazine. This design was adopted by Greece in 1903 in both rifle and carbine versions, and they served as the Greek Army's principle infantry arms until after the Second World War. Although not overly successful in military applications, the Mannlicher-Schoenauer became the basis of the renowned Steyr hunting rifle, with its slim fore end that extended to the muzzle. This stock with its characteristic features are still known by the generic name "Mannlicher".