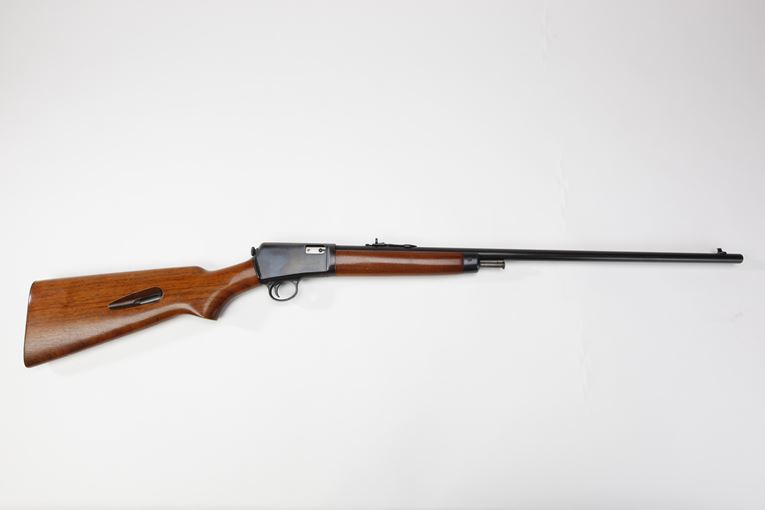 
The Model 1903 Winchester, introduced in 1903, was the first U.S. semi-auto rifle designed for .22 rimfire cartridges. The simple blowback action depends on uniform recoil from the cartridge for reliable operation. Since contemporary .22 rimfire ammunition was not made to consistent standards, Winchester chambered the rifle for the unique .22 Win. Auto cartridge. While the use of this cartridge ensured reliable operation, it also hurt sales.

In 1933, the Model 63, an essentially identical rifle but chambered for for .22 Long Rifle, was introduced to replace the Model 1903. Oliver Fisher Winchester was born on November 30, 1810 in Boston, Massachusetts. Although raised on a farm, Winchester eventually became a carpenter, and by 1830, he was a construction supervisor in Baltimore, Maryland. While in Baltimore, he entered the dry goods business, and after several years, Winchester became a manufacturer of men's shirts in New Haven, Connecticut. This venture proved to be sufficiently profitable that he began to extend his business interests.

In 1855, Winchester became a stockholder and director of the Volcanic Repeating Arms Company, a firearms manufacturing firm that brought together the talents of Winchester with those of Horace Smith, Daniel B. Wesson, and B. Tyler Henry. Volcanic produced lever-action repeating pistols and carbines based on the patents of Smith & Wesson. These two, who would later become famous for their revolvers, had followed up on the earlier repeating rifle designs of Walter Hunt and Lewis Jennings. Smith and Wesson sold their patents and other assets to the newly-organized Volcanic Company, and after a short time, both left Volcanic and began work on the first of many revolvers to bear their names. The Volcanic's operating mechanism was very similar to that still used today in lever-action repeaters, but the guns were plagued by problems with their self-contained cartridges. These consisted of a hollow-based, powder-filled conical bullet backed by a fulminate primer plate.

In addition to problems with velocity due to the limited amount of propellant available, these rounds also had the unfortunate tendency to go off prematurely, sometimes while still in the magazine. A further complication was the Volcanic's lack of an extractor or ejection system. These were not necessary when the ammunition functioned properly, but their lack created additional problems in case of misfires. Consequently, marketing and sales efforts were hampered.

Others, including Daniel Wesson, were also working on this problem, and Wesson's .22 rimfire cartridge may have influenced Henry's efforts. By 1860, Henry had developed a .44 rimfire, and he then turned his efforts to modifying the Volcanic to load, fire, and extract his new cartridge. His subsequent patent for these improvements was assigned to the New Haven Arms Co. The firm abandoned its pistol line and concentrated its efforts on the manufacture of lever-action rifles of Henry's design which also bore his name. The coming of the Civil War brought with it a great demand for firearms.

Although the Henry, with its sixteen-shot tubular magazine and impressive rate of fire was a truly revolutionary rifle, conservative elements within the U.S. Army favored the tried-and-true single-shot muzzle loading rifle-muskets as a standard infantry arm. The government did place orders for a total of over 1,700 Henry rifles, and many of these were issued to troopers of the 1st Maine and 1st District of Columbia Cavalry regiments. Many more found their way into the ranks through private purchase. These rifles provided Union troops with a formidable advantage over their enemies. At least one awed Confederate referred to the Henry as "that damned Yankee rifle that can be loaded on Sunday and fired all week!"

Winchester was able to enter the military market in later years, with sales both to foreign governments and to the U.S. Army. During both World Wars, Winchester-manufactured rifles and shotguns served U.S. and Allied troops in various parts of the globe. In addition to contract production of the U.S. Model 1917 bolt-action and the famous M1 Garand semi-automatic rifles, Winchester also produced the Model 1897 and Model 12 slide-action shotguns, as well as the M1 Carbine.