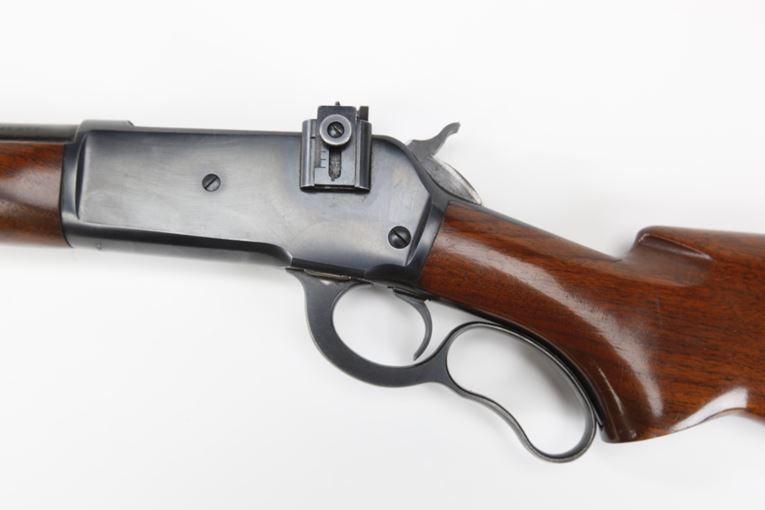 One of his tasks was to develop a metallic cartridge to replace the inferior self-contained bullets chambered by the Volcanic. Others, including Daniel Wesson, were also working on this problem, and Wesson's .22 rimfire cartridge may have influenced Henry's efforts. By 1860, Henry had developed a .44 rimfire, and he then turned his efforts to modifying the Volcanic to load, fire, and extract his new cartridge. His subsequent patent for these improvements was assigned to the New Haven Arms Co. The firm abandoned its pistol line and concentrated its efforts on the manufacture of lever-action rifles of Henry's design which also bore his name.

The coming of the Civil War brought with it a great demand for firearms. Although the Henry, with its sixteen-shot tubular magazine and impressive rate of fire was a truly revolutionary rifle, conservative elements within the U.S. Army favored the tried-and-true single-shot muzzle loading rifle-muskets as a standard infantry arm. The government did place orders for a total of over 1,700 Henry rifles, and many of these were issued to troopers of the 1st Maine and 1st District of Columbia Cavalry regiments. Many more found their way into the ranks through private purchase. These rifles provided Union troops with a formidable advantage over their enemies.

At least one awed Confederate referred to the Henry as "that damned Yankee rifle that can be loaded on Sunday and fired all week!" In 1867, the New Haven Arms Company was re-organized and became known as the Winchester Repeating Arms Company, with Oliver Winchester serving as president, treasurer, and board member. The new company also introduced a new firearm, the Winchester Model 1866. These .44 rimfire caliber brass-framed arms were available in musket, rifle, and carbine configurations. Winchester still hoped to crack the military market, but despite the Henry's success and its popularity during the Civil War, the Army remained wedded to the single-shot rifle.

Nonetheless, Henry and Winchester Model 1866 "Yellow Boy" rifles found a ready market on the western frontier. The Indians referred to these arms as "many shots," and "spirit gun," which showed a measure of awe and respect for the products of the New Haven-based company. Many warriors were able to obtain these arms for themselves, and more than twenty of them were used against George A. Custer's 7th Cavalry and their single-shot Springfield carbines at the Little Bighorn in June, 1876.

Winchester repeaters also found favor with miners, homesteaders, ranchers, lawmen, and highwaymen. Winchester's success continued with the centerfire Model 1873 and 1876 lever-action repeaters, both of which were available in a range of calibers and optional features. The Model 1886 was a milestone for the company in two respects: it marked the first association between Winchester and designer John Browning, and it was also the first lever-action rifle capable of chambering big-game calibers, including the .50-110 Express cartridge.

Other Browning-designed Winchesters include the Model 1885 single-shot rifle, Model 1887 lever-action shotgun, Model 1890 slide-action rifle, Model 1893, Model 1894, and Model 1895 lever-action rifles. The Model 1894 alone accounted for over five million sales and is still in production. Winchester was able to enter the military market in later years, with sales both to foreign governments and to the U.S. Army. During both World Wars, Winchester-manufactured rifles and shotguns served U.S. and Allied troops in various parts of the globe.