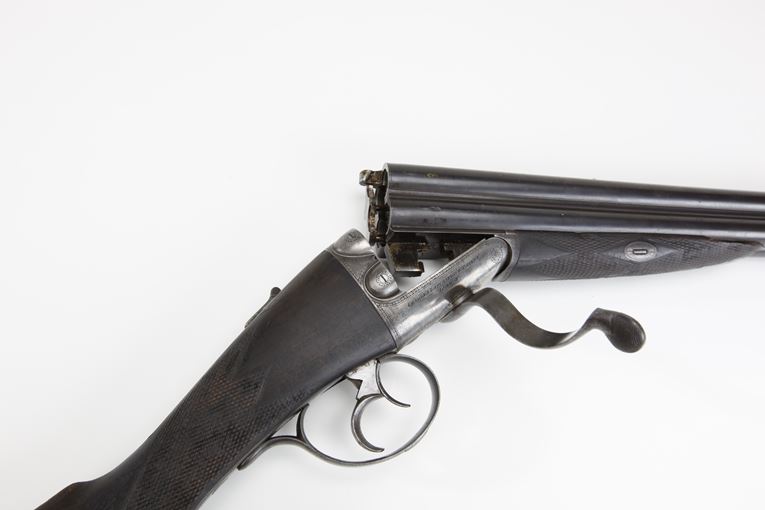 This four barrel gun has the oval Lancaster rifling which gives the appearance of an unrifled bore. This rifle was once the property of the Maharajah of Rewa, India, who gave it to Mr. Scott. Mr. Scott is reported to have killed at least one tiger with this rifle. The rear "trigger" is actually a cocking lever. A pull on the cocking lever readies the upper right barrel. After that barrel is fired, successive pulls on the cocking lever and trigger fire the remaining barrels in turn.


Charles Lancaster had been a barrel maker for Joseph Manton before starting his own business at 151 New Bond St., London, in 1826. The firm passed to his two sons, Charles W. and Alfred, at his death in 1847. These two carried on as partners until 1859, when Alfred went his own way and started his own business in an unrelated field. In 1870, Charles took on Henry A.A. Thorn as apprentice, and Thorn purchased the company after C.W. Lancaster's death eight years later. Thorn continued to produce and market guns under Lancaster name.

In addition to a distinguished client list which included royalty from across Europe as well as distinguished shooters such as Annie Oakley, this firm achieved fame for its unique or unusual designs. The firm's box lock design is well-known but perhaps the most notable feature associated with Charles Lancaster is the oval-shaped "non-fouling" bore, in which the bore is .006" out of round. Although the barrel has no conventional rifling grooves, spin is imparted to the bullet by giving the oval cross-section of the bore a uniform twist along the length of the barrel. The oval form is too slight to be readily perceptible and the barrel appears to be unrifled. This design provided the same degree of accuracy as a conventionally-rifled bore, but the absence of sharp-cornered rifling made cleaning much easier. The system uses ordinary bullets with a circular cross-section.

Charles Lancaster was one of many European gunmakers responsible for the rapid pace of development of breech-loading shotguns and rifles in the second half of the 19th century, a period in which guns evolved from percussion muzzle-loaders to hammerless ejector breech-loaders. Initial efforts to produce top-break designs were generally unsatisfactory due to a lack of strength at the hinge which joined the barrels to the stock. Consequently, these guns had a tendancy to shoot loose over a period of time. In effort to increase rigidity, Lancaster and others adopted a lever system that caused the barrels to slide forward before tilting down. Later designs would include now-common features such as crossbolt or doll's head mechanisms.

To eliminate gas leaks common in pinfire cartridges of the period, Lancaster adopted a cartridge case similar to a modern rimfire. These cases had the drawback of being impossible to reload, but they pointed the way to further development in this area. Between 1882 and 1900, Thorn patented and produced a top-break self-cocking over-and-under pistol with reciprocating firing pins that alternately fired barrels. These pistols, as well as a double-trigger four-barreled version, also featured Lancaster's patented oval-bore rifling. Reliability was enhanced through the use of a totally enclosed mechanism which provided protection from the elements.

Thorn's pistols also provided a superior gas seal than that found in revolver designs, with which they competed favorably. Four-barreled pistols were more expensive to produce than were two-barreled versions, and these were generally purchased by the well-to-do. Chambered for larger calibers, they were suitable for use by African big-game hunters as backups for their rifles. Equally effective against charging warriors, these pistols were highly favored by British Army officers, and saw service in Egyptian and Sudanese campaigns of the period. Although Charles Lancaster produced both hammer and hammerless big-game rifles ranging from 4-bore singles to 8-bore and flanged .280 Nitro Express doubles, the firm's unusual four-barrel design was also featured in breech-loading shotguns. Unlike earlier muzzle-loading designs from other manufacturers, the Lancaster four-barrels did not employ rotating barrels and required a mechanism to rotate an internal striker to fire each barrel in turn.

After two unsuccessful designs, Thorn hit upon the idea of using two triggers coupled with an underlever that was used to recock the strikers and rotate them into position with the desired barrel pair. Although having a weight of about 10 pounds, these guns were popular for hunting driven birds, where a shooter could get off four shots without the need to exchange a conventional double with a loader-servant. The four-barrel design went out of favor after about 1893.