James Purdey & Sons Over Under Shotgun 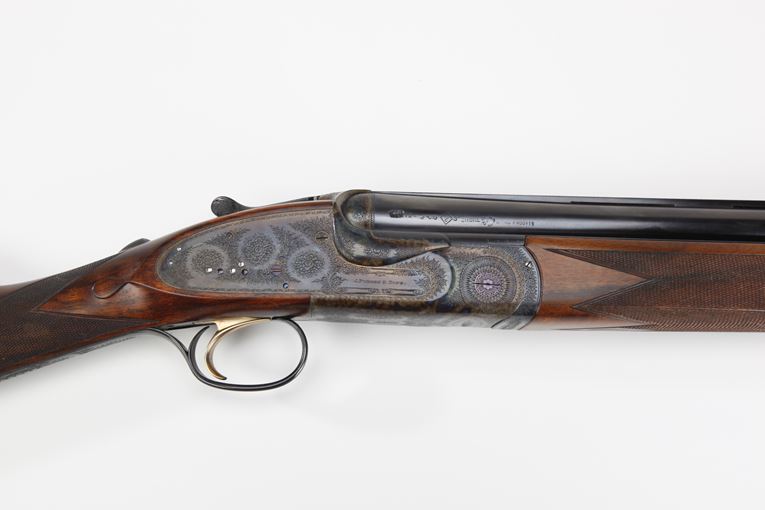 According to factory records, this gun was manufactured in 1953 as an over/under gun with 27-inch barrels bored full-choke, ventilated matted rib, beaded edge to guard, single trigger, gold plated lockwork, automatic safety, best Fine Engraving, barrels engraved, "Made expressly for Thomas B. Walton by his friend Tom Purdey, Chairman, James Purdey & Sons." The barrels have a large metal foresight bead and a center sight, and the strap extends over the comb. The stock has metal heel and toe pieces, with a length of 14 7/8 inches at the middle and a bend of 2 - 1 1/2 inches and no cast off. Overall weight is 8 pounds.

In 1949, Richard Beaumont began his career at James Purdey, and his efforts over the next three decades would ultimately turn the company back to profitability. At the start of Beaumont's tenure, debts continued to mount, as did backlogs for orders. The firm was taking up to five years to complete the manufacturing process on some guns, and the price of the finished product was nearly 70 percent below production costs, but by the mid-70s, this situation had been brought under control through Beaumont's hard work and leadership. In 1994, James Purdey & Sons was acquired by Vendome Luxury Group, the corporate parent of such well-known companies as Cartier and Dunhill. Presently, Richard Purdey, great-great-great grandson of the company's founder, has taken over from Richard Beaumont as the firm's Chairman of the Board while Nigel Beaumont, Richard's cousin, serves as Managing Director.