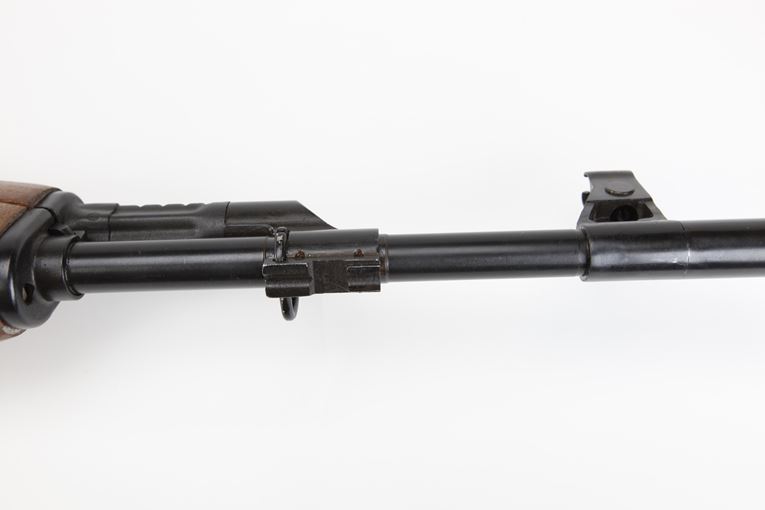 This sporterized version of the Soviet-designed AKM rifle was produced for export in the People's Republic of China. To qualify for import under c.1994 American firearms laws, the buttstock had to be in the thumbhole configuration and a ten-round magazine was the only capacity offered. SN 317420


Soviet automatic rifles are most often associated with Mikhail Timofeyevich Kalishnikov and his famous AK-47 rifle. These are the most commonly-encountered military arms in the world, having served as the standard battle rifle of the Soviet Union and her Warsaw Pact allies, as well as the People's Republic of China, the Democratic People's Republic of Korea, the Democratic Republic of Vietnam, and many of the Arab states of North Africa and the Middle East. AK-47s have also been produced in many of these countries. In addition, the Kalishnikov has heavily influenced arms designs in Finland, Israel, and South Africa.

Although undoubtedly the most successful, Kalishnikov's was not the first Russian/Soviet automatic rifle. Tsarist arms designer Vladimir Gregoryevich Fedorov introduced his selective-fire Avtomaticheskaya Vintovka Fedorova, 1916g (Fedorov Automatic Rifle, Model 1916) during the First World War. Fedorov rejected the Moisin Nagant 7.62x54mm rimmed cartridge, then the standard of the Russian Army, in favor of the smaller Japanese 6.5x50mm semi-rimless cartridge, which was more suitable for automatic fire. Although some Fedorov Avtomat rifles were used by Tsarist troops, regular production of these arms did not begin until 1919. Aside from being difficult to produce, the Fedorov experienced problems when subjected to battlefield use. Fewer than 5,000 were turned out before manufacturing ceased in 1925. After the October Revolution and the civil war that followed, the new Soviet government continued the search for a suitable automatic rifle.

Prior to the Great Patriotic War, designers Sergei Gavrilovich Simonov and F. V. Tokarev submitted selective-fire rifles chambered in 7.62x54mmR, which Communist Party officials had opted to use as their standard cartridge. The Tokarev proved to be the most reliable and was adopted under the designation Samozaryadnaya Vintovka Tokareva 1938g (Tokarev Self-loading Rifle, Model 1938). The SVT38 proved to be heavy, difficult to manufacture, and less reliable under field conditions than the Red Army desired. Tokarev modified his design, which was then re-designated the SVT40. These rifles became one of the standard combat arms of Soviet forces during the Second World War, but they were little improved from the earlier SVT38. The search for a new automatic rifle continued. During this period, development continued on another front as well. Soviet pistols also chambered a 7.62mm cartridge, and a family of submachine guns emerged which made use of this ammunition. The first of these was the PPD, which had been developed before the war. Featuring a non-detachable wood buttstock, this design was very similar in appearance to the German MP18, but was also very expensive to manufacture.

After the Nazi invasion of the Soviet Union, a new submachine gun designed by Georgi Shpagin made its appearance. Of simple construction and crude finish, this wooden-stocked blowback-operated arm, designated PPSh41, utilized either a 25-round box or 71-round drum magazine. These arms could be manufactured quickly and inexpensively, but were extremely effective in combat. They quickly became a favorite among the soldiers of the Red Army, and by the war's end, approximately 5 million PPSh41 submachine guns had emerged from Soviet factories. The last of this family of submachine guns was the PPS, which was adopted in 1943. These arms were of steel construction and included a folding metal buttstock similar to that used by the MP38/40. The drum magazine was dropped in favor of a 35-round detachable box magazine. Although later replaced by other designs, the PPSh41 and PPS continued in service throughout the 1950s, and some remained in the arsenals of the Soviet Union's Warsaw Pact allies even longer.

Soviet bureaucrats, perhaps noting the success of the German MP38/40 and StG44, the American M1 Carbine, and even their own PPSh41 and PPS, all of which were chambered for reduced-power cartridges, made a significant policy change in ordering the development of a similar cartridge suitable for use in this type of firearm. The resulting cartridge, designated M43, also employed a 7.62mm bullet, but unlike its predecessor, its 39mm case was both short and rimless. Having adopted a new cartridge, defense officials directed that design bureaus develop a new automatic rifle as well.

The most promising design which chambered the new 7.62x39mm round was submitted by S. G. Simonov, a former machinist who had risen to become both a Master Gunsmith and mechanical engineer under the Communist regime. This gas-operated rifle had several limitations, among which was its non-detachable magazine. Most significant was its semi-automatic-only capability, a feature that contributed to its replacement within a very few years. Even with its deficiencies, the wartime emergency led to the decision to produce these arms for use on the Byelorussian Front, where they found favor with Soviet troops. After modification, these arms were adopted and designated Samozaryadnyi Karabin sistemi Simonova obrazets 1945g, or SKS45, as they are more commonly known. Later adopted by the People's Republic of China as the Type 56 Carbine, the SKS was manufactured in quantity in the Soviet Union, China, North Korea, East Germany, and Yugoslavia. The SKS was widely used by North Vietnamese and Vietcong troops, and by various rebel and irregular forces around the world, and they are still encountered as second-line arms. Many of these carbines have also been imported into the United States. Within a few years of its adoption, the SKS had been replaced by Mikhail Kalishnikov's AK-47.

Although possessing only the equivalent of a high school education, Kalishnikov had an aptitude for mechanical design. After working on the Turkestan-Siberian Railroad, he was drafted into the Red Army in 1938 at the age of 19. He trained as an armorer before the war, then served as a tank crewman and was severely wounded in combat. During his recovery, the young soldier began avidly studying books on firearms design and manufacturer. While continuing his convalescence near his home in the city of Alma Alta, Kazakhstan, U.S.S.R., he designed a submachine gun that he later fabricated with the help of a machinist friend. He then gained the sponsorship of a local Communist official, who made arrangements for him to continue his work on the new arm. Although his design was not significantly superior to the PPS, his obvious talent was apparent to military ordnance officials. Consequently, he was assigned to the Red Army's proving grounds at Ensk, where he met and worked with Simonov and other designers. This experience further enriched Kalishnikov's knowledge and abilities.

In addition to minor design responsibilities, he developed both a series of improvements for machine guns, and a new rifle, which was later competed unsuccessfully against the SKS45 for adoption by the nation's armed forces. After the war, the Soviets continued the search for an acceptable selective-fire battle rifle. Once again, Kalishnikov returned to the drawing board and developed a new gas-operated design chambered for the M43 cartridge and based in part on previous battle-tested U.S. and German arms, including the M1 Garand, M1 Carbine, and StG44. This rifle showed sufficient promise that its inventor was given approval to build several prototypes. Along with his small team of draftsmen, machinists, and armorers, Kalilshnikov continued work on his design. His finished product made use of sheet metal stampings and rivets where possible, coupled with a curved 30-round detachable magazine, an over-the-barrel gas tube, and oversized bolt which provided for dependable function under adverse conditions and reliable extraction of spent cartridge casings even when fouled. Designated the Avtomat Kalishnikova obrazets 1947g, the original AK-47 design featured a non-detachable wooden buttstock, but subsequent models also utilized a folding metal stock. A lighter and more durable version, known as the AKM, was introduced in 1959.

The RPK light machine gun also stems from Kalishnikov's basic design. Kalishnikov later applied his talents and features of the AK-47 to the design of the Dragunov sniper rifle and PKM light machine gun, both of which chamber the 7.62x54mmR cartridge. One of the most recent additions to the AK family is the AK-74 battle rifle, which bears a striking resemblance to its predecessor but features several changes to accommodate the smaller 5.45x39mm cartridge. The basic Kalishnikov design has been adapted for use in non-military arms including shotguns and sporting rifles.

Mikhail Kalishnikov is a hero in his homeland, and has received the highest decorations that a grateful nation could bestow. His name and his arms designs have also become famous around the world. The AK-47 and its successors have become the most successful and widely-produced battle rifles in history. Manufactured both in the Soviet Union and in other Communist nations, production estimates range as high as 50 million. The mainstay of military forces in the Communist world, they have been adopted by over fifty other nations as well. As with the SKS, the AK-47 and AKM have also been supplied to an international clientele that includes groups other than recognized governments and organizations. In addition, the Kalishnikov rifle has been adopted and adapted by other nations, and has spawned both the Israeli Galil and Finnish Valmet military rifles. Although the Russian government has recently adopted a new rifle to replace the earlier Kalishnikov-designed arms, their simplicity, reliability, and sheer numbers guarantee that they will continue in service for many years to come.