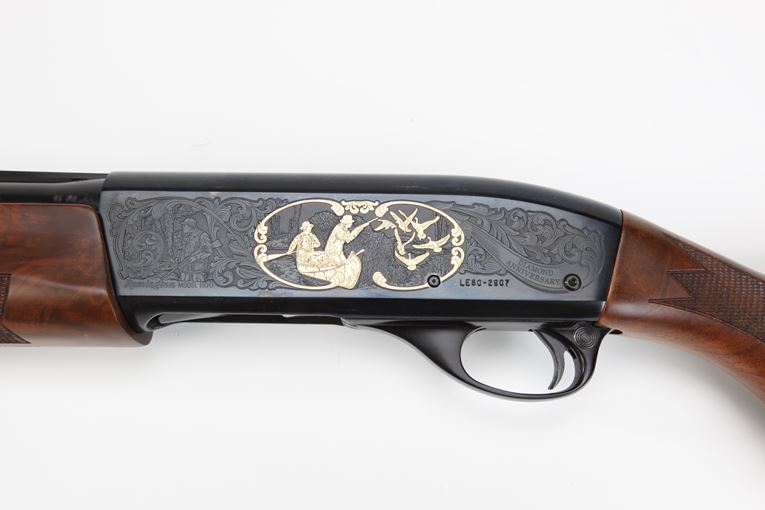 This gold-engraved limited edition gun is one of 3000 that were manufactured to commemorate the 75th anniversary of the popular Remington Model 11/ Model 1100 shotguns. SN LE80-2907


1979 Remington (U.S.) Commemorative Model 1100 Semi-automatic Tube Magazine Shotgun (breech-loading/ smokeless powder/ shot ammunition) Beginning in 1905, Remington produced many major types in their 11 and 1100 series of autoloading shotguns. In 1985 their prices varied from around $800 to over $7,000. Like Browning and Winchester, Remington has displayed a truly amazing performance in the use of standardized machine tools to mass-produce firearms, all based on essentially the same action. Remington has also displayed an amazing marketing technique: practically every conceivable option or configuration becomes available, depending on how much money the purchaser wishes to spend. This gold-engraved, limited-edition example commemorates 75 years of production for the Models 11 and 1100. Dating from about 1819, Remington is the oldest operating arms company in American. --Dr. William L. Roberts, THE AMERICAN LIBERTY COLLECTION; #182 Eliphalet Remington II was born in Suffield, Connecticut on October 28, 1793. His father, Eliphalet Remington, moved his family from Connecticut to the Mohawk River Valley in 1800, where he cleared enough land for a small farm, built a two-room cabin that was later replaced by a larger home, and, along with others who had also moved to the region from Connecticut, established the town of Litchfield. Eliphalet Remington Sr. also owned an iron forge. Here he both fabricated and repaired tools, equipment, and hardware, and Lite, as Eliphalet II was nicknamed, worked alongside him and learned the trade as well. The younger Remington had the opportunity to examine various long arms that were owned by local residents, and in 1816, he decided that he was capable of manufacturing a good rifle barrel. This he proceeded to do, and he took the finished product to a local gunsmith for boring and rifling. Lite then fitted a lock, stock, and furniture, and upon completion, he found that it shot well. After showing his new gun to area residents, he soon had a large number of orders for gun barrels. These were octagonal in shape, and as with his initial effort, boring and rifling was done by a gunsmith in nearby Utica. The completion of the Erie Canal in 1825 and the establishment of railroads soon thereafter provided an economic boost to the region. Remington's rifle barrel works expanded as well. By 1828, he had established his own forge in Ilion, and he soon came to dominate the local trade, producing over 8,000 barrels per year for gunsmiths who would do final rifling and fitting. In 1844, Remington's oldest son, Philo, joined him in his business. This was reflected in the firm's name, which became E. Remington and Son. By the mid-1850s, his two other sons, Samuel and Eliphalet III, had also joined the company, and the name changed yet again. In addition to gun barrels, E. Remington and Sons also manufactured plows, mowing machines, cotton gins, and firefighting equipment. In later years, their product line expanded to include bicycles, sewing machines, and typewriters. Remington's involvement in the manufacture of completed firearms came in 1848, when the company received a contract for the completion of 1,000 Jenks breechloading carbines for the U.S. Navy. In addition, Remington took over a defaulted contract from another manufacturer for the production of 5,000 U.S. Model 1841 "Mississippi" rifles. The business expanded through the 1850s, and handgun production began in 1857 with the introduction of the Remington-Beals pocket revolver. The coming of the Civil War naturally brought about a dramatic increase in the demand for firearms, and Remington's production also increased to keep pace. During this period, the company manufactured both .36 and .44 caliber revolvers, as well as Model 1863 Percussion Contract Rifle, popularly known as the "Zouave" rifle. The post-war years brought smaller pocket pistols and deringers, the Remington-Smoot metallic cartridge pistols, Remington Single Action Army revolvers, rolling block rifles and pistols, slide, autoloading, and hammerless shotguns, and the Remington-Hepburn falling block rifles. During the 20th century, Remington has established itself as a manufacturer of high quality sporting arms, especially with upland game and bird hunters. The company also did its part during two World Wars as a manufacturer of military arms and munitions. In addition to the M1911 semi-automatic pistol, the Browning Model 1917 heavy machine gun, and the Model 1917 bolt-action rifle, Remington also manufactured the Pedersen device. This was an early attempt to increase the firepower of individual infantry troops armed with the Springfield Model 1903 rifle. These rifles were modified by cutting the receiver wall to accommodate an ejection port, and the replacement of the bolt with a semi-automatic assembly that accepted a 40-round stick magazine loaded with the .30 caliber Pedersen, a pistol-class cartridge. Over 65,000 Pedersen devices were manufactured, but most were scrapped after the war. During the Second World War, Remington manufactured the M1903 (Modified) rifle, a transitional long arm in which stamped parts replaced some that had been milled in the earlier model, while other parts were dispensed with altogether in the interests of reducing production time. The company also manufactured the redesigned M1903A3 battle rifle and M1903A4 sniper rifle. Eliphalet Remington II died in 1861, at which time Philo took over management of the company. Samuel died in 1882, and Philo purchased his share in the company. By 1886, E. Remington & Sons had experienced serious downturns, and the company went into receivership. In 1888, Marcellus Hartley, a partner in the New York sporting and military goods firm of Schuyler, Hartley, and Graham, as well as the founder and owner of the Union Metallic Cartridge Company, went together with Winchester Repeating Arms Company to purchase Remington. Each partner had an equal share of the firm, which was renamed Remington Arms Co., with Hartley serving as president and Thomas Bennett of Winchester assuming the role of vice president. In 1896, Winchester sold its stake in Remington to Hartley. Marcellus Hartley died in 1902, and leadership of the company passed to Marcellus Hartley Dodge. In 1910, Remington Arms and Union Metallic Cartridge were merged into a single company, known as Remington-UMC. In 1934, both company's name and ownership changed as Remington-U.M.C. was purchased by DuPont and reorganized as the Remington Arms Co., Inc. The Ilion armsmaker remained a part of the DuPont organization until 1993, when Remington was purchased by the investment group of Clayton Dubilier Rice.