Syracuse Arms Side by Side Shotgun 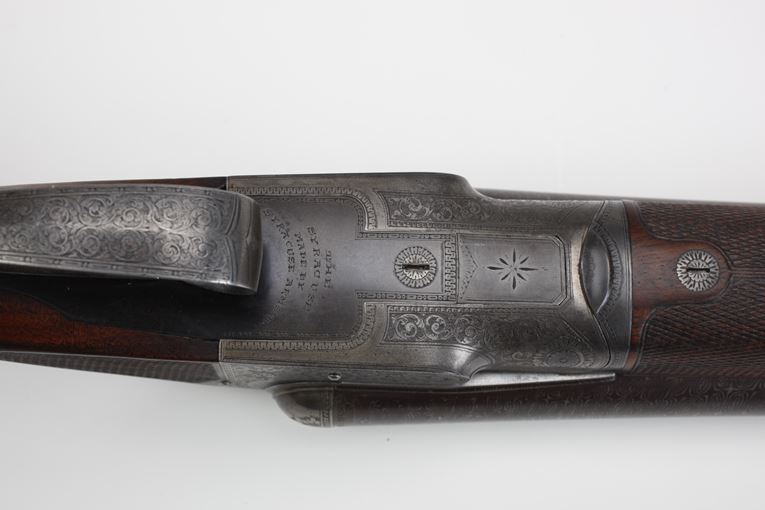 Frank Hollenbeck organized the Syracuse Arms Company and started gun production in 1893 and it is believed the company ceased operations around May, 1905 when all company and gun related advertising ceased.  Their first complete catalog was issued in 1902 and in that catalog announced their new "improved model" with these added features: a strengthed frame lengthened slightly so that the cheeks of the stock were inletted into the farme sides to prevent splitting, a longer and wider top strap, an improved safety slide; and most importantly, a redesigned rib extension that constituted a stronger "double bolt" upon closing the gun (shell technology was improving).

The second variation/change took place just prior to serial number 25XXX; and the third variation took place in late 1903 when the cocking mechancism was changed from fixed cocking hooks on each side of the barrel lug to a sliding cocking plate affixed to the barrel lug face and activated/de-activated by the attachment/removal of the fore iron. The 1902 catalog also explains that the name of the gun was changed from THE HOLLENBECK to THE SYRACUSE in 1896, allegedly in honor of the city where the gun was produced; but the real reason was revealed in surviving letters from the estate of Angie Hollenbeck, Frank Hollenbeck's first wife. Frank had a falling out with company directors and resigned from the company in July, 1895; the move to rename the gun was simply an attempt to disassociate the company from Frank Hollenbeck.

This hammerless double was initially offered in 10 and 12-bore with the 16-bore added in 1901; and the 20-bore first cataloged in 1902. Barrel lengths, depending on bore size, were offered in 26, 28, 30, and 32 inch; with weights and barrel lengths specified by the customer. Barrel steels were offered as follows: Grade 00, "Triplet Steel" (first offered in 1901); Grade 0and Grade 1, "New Twist"; Grade 2 and 3, "Improved Damascus"; the Grades A and A-1 Special Trap, "Fine Damascus" or optional Krupp Steel; the Grade B and Grade C, "Finest Grade Damascus" or optional Krupp Steel; and the top of the line Grade D, "Whitworth Fluid Compressed Steel" or the "Finest Grade of Damascus Steel Barrels Obtainable" (the Grade D gun retailed for $475.00 in 1902.

The company did make an exposed hammer model double gun but they were only made for a very short period just prior to the cessation of production.