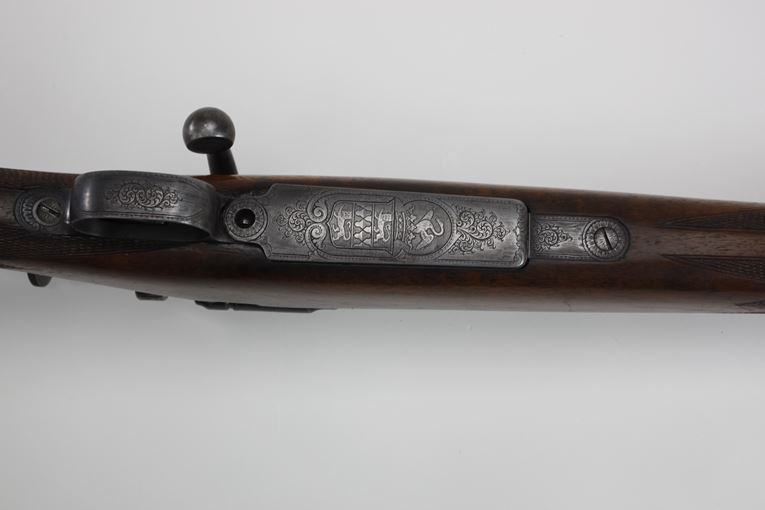 This bolt-action rifle was used by Townsend Whelen on several hunting expeditions including one to South America. Game species harvested were recorded by markings on the stock.


Noted shooter, writer, and visionary Townsend Whelen did as much or more than almost anyone to advance the shooting sports. Much of what of our rifles are today was shaped by Townsend Whelen; much of how we think of rifles he thought first. Townsend Whelen shot throughout his long life; in fact, there seems to have been no time when he was not involved with the rifle. Whelen's list of accomplishments is quite long. He did, or helped with, or was the first to write of things that are now legends, and he did it alongside people who are likewise legendary.

This custom Springfield with its Poldi "Anti-Corro" steel barrel is as famous as any produced by the Massachusetts arsenal, and it was a fitting subject for for much of Whelen's written work. In 1912, after Capt. Edward Crossman wrote to him of the remodeled Springfields that gunsmith Louis Wundhammer was making, Whelen put Eastern gunsmiths to the test. After two unsatisfactory tries, he got a German .30-caliber barrel from gunsmith Fred Adolph, and had it fitted to an action at Springfield Armory. The gun was returned to Adolph for stocking and floorplate engraving. A Lyman-fitted a cocking piece sight completed the rifle, and Whelen subsequently took more game with it than with any other.