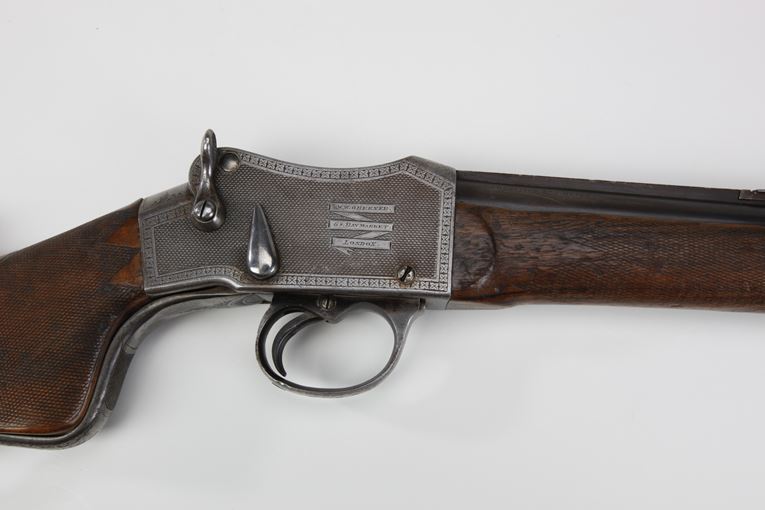 This sporting rifle was manufactured for African or Indian trade and has a rear sight calibrated for several shooting distances. SN 43835


W. W. Greener was born in 1806 near Newcastle-on-Tyne, England. He became an apprentice in his father's gunmaking business in Birmingham until losing his eyesight at the age of 17 due to a case of measles. Unable to continue working on guns himself, he became a supervisor in the factory. Although nearly blind, the younger Greener was a visionary in the field of firearms manufacturing, having developed an ability to see the potential in the designs of others and to perfect them into a superior product. Greener was also a master of self-promotion, writing extensively about his contributions to the gunmaker's art, often at the expense of those whose designs he had appropriated. His book, The Gun and its Development, a definitive work on the subject, went through eleven editions during his lifetime, and an updated version is still available today. Greener developed an interest in building strong breechloading guns after a dispute with his father over the merits of this design led to his parting of the ways between the two in 1829. He went on to build what became one of the strongest actions ever, adapting his cross-bolt design from a French flintlock and the then un-patented rotary underbolt design of Henry Jones. These robust, nearly indestructible firearms were suitable for a variety of loads ranging from waterfowl to African big game rifle cartridges. The firm also manufactured what were termed "Empire guns," arms that were designed for the utmost in reliability in the far corners of the British Empire, places where hard service and lack of parts and skilled gunsmiths were common. Greener's talent for adapting the designs of others landed the company in a patent dispute. By 1875, William Anson and John Deeley had developed a hammerless action that was later patented by their employer, Westley Richards. Greener bought a license to use these actions, but the firm later began marketing a similar design without paying fees to the patent holders. Westley Richards director Edward Couchman charged Greener with patent infringement, but the case was later settled in Greener's favor. The company's guns were the winners of many awards, including the London Gun Trials of 1875 and 1877-79, as well as other prestigious prizes on the continent, in the U.S. and Canada, and New Zealand. Greener pigeon guns were also popular with shooters on both sides of the Atlantic, and were used to win many competition shooting events, and high-quality Greener sidelocks were also a staple of the company. W. W. Greener also manufactured ornate presentation-grade pieces for various international exhibitions, including the side-by-side St. George Gun. This exquisite piece was built by Greener's son Harry, a partner in his father's business and a skilled stocker in his own right, with assistance from the company's master craftsmen. The St. George Gun features Damascus barrels, a Circassian walnut stock, a Greener "Unique" cross-bolt boxlock ejector action fitted with a single trigger, and engravings of St. George and the Dragon executed by Master Engraver Harry Tomlinson. The gun took several years to complete, and was ready by 1903. This gun passed out of the hands of the firm and was eventually sold at Christie's auction in July 1984 for 10,800 pounds. Presently, it is once again owned by the Greener family. A second St. George Gun with double triggers was produced for a Persian nobleman in 1913. Its whereabouts are presently unknown. A third St. George Gun was produced by the firm in 1992. W. W. Greener is still owned and operated by the Greener family. The firm is currently headed by Graham Greener, great-great grandson of the founder.