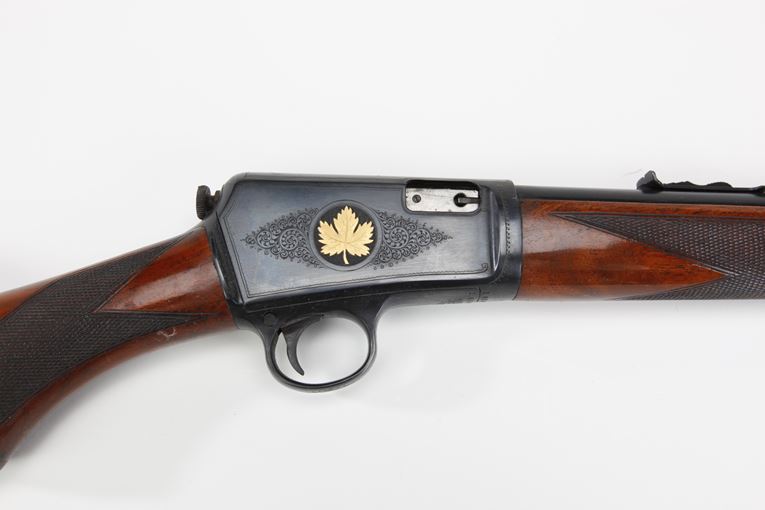 Engraved with an inlaid gold Canadian maple leaf motif on its receiver, this semi-automatic rifle was owned by an American gun owner and shooter who spent considerable time in Canada. This model was introduced in 1933 to replace the similar Model 1903 which used the .22 Win. Auto cartridge.


The Model 1903 Winchester, introduced in 1903, was the first U.S. semi-auto rifle designed for .22 rimfire cartridges. The simple blowback action depends on uniform recoil from the cartridge for reliable operation. Since contemporary .22 rimfire ammunition was not made to consistent standards, Winchester chambered the rifle for the unique .22 Win. Auto cartridge. While the use of this cartridge ensured reliable operation, it also hurt sales. In 1933, the Model 63, an essentially identical rifle but chambered for for .22 Long Rifle, was introduced to replace the Model 1903.

Oliver Fisher Winchester was born on November 30, 1810 in Boston, Massachusetts. Although raised on a farm, Winchester eventually became a carpenter, and by 1830, he was a construction supervisor in Baltimore, Maryland. While in Baltimore, he entered the dry goods business, and after several years, Winchester became a manufacturer of men's shirts in New Haven, Connecticut. This venture proved to be sufficiently profitable that he began to extend his business interests. In 1855, Winchester became a stockholder and director of the Volcanic Repeating Arms Company, a firearms manufacturing firm that brought together the talents of Winchester with those of Horace Smith, Daniel B. Wesson, and B. Tyler Henry.