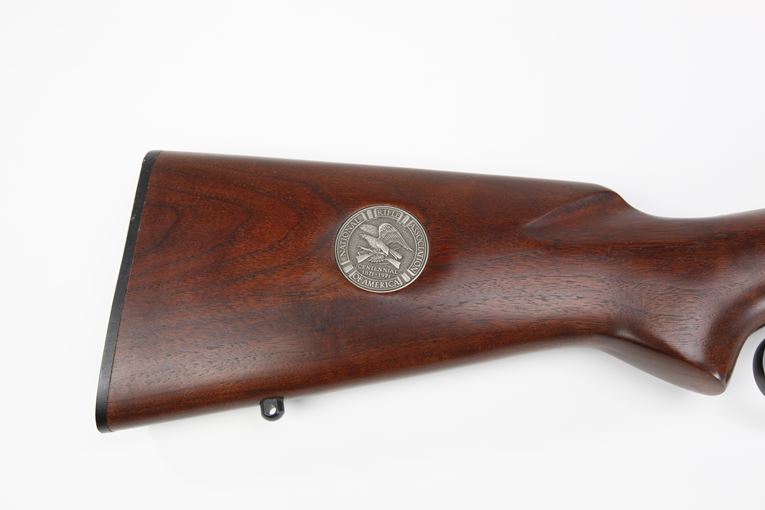 The Winchester NRA Centennial issues consisted of 23,400 muskets and 21,000 rifles. Both longarms were originally offered for a retail price of $150 (each) during 1971 to mark the 100th anniversary of the founding of the National Rifle Association. This commemorative edition sold out and is still very popular on the secondary market with collectors.

Volcanic produced lever-action repeating pistols and carbines based on the patents of Smith & Wesson. These two, who would later become famous for their revolvers, had followed up on the earlier repeating rifle designs of Walter Hunt and Lewis Jennings. Smith and Wesson sold their patents and other assets to the newly-organized Volcanic Company, and after a short time, both left Volcanic and began work on the first of many revolvers to bear their names. The Volcanic's operating mechanism was very similar to that still used today in lever-action repeaters, but the guns were plagued by problems with their self-contained cartridges. These consisted of a hollow-based, powder-filled conical bullet backed by a fulminate primer plate. In addition to problems with velocity due to the limited amount of propellant available, these rounds also had the unfortunate tendency to go off prematurely, sometimes while still in the magazine. A further complication was the Volcanic's lack of an extractor or ejection system. These were not necessary when the ammunition functioned properly, but their lack created additional problems in case of misfires. Consequently, marketing and sales efforts were hampered.

In 1857, financial problems forced Volcanic into insolvency. The company's assets were purchased by Oliver Winchester, who by this time had become Volcanic's president. Winchester reorganized the firm and resumed operations under the name of New Haven Arms Company. Unlike others in the field of firearms manufacture during this period, Winchester's talents lay not as an inventor but as a successful businessman. This success would continue with New Haven, and it extended beyond financial matters to the staffing of the new company. Among those hired by Oliver Winchester was B. Tyler Henry, who became plant manager. Henry had a great deal of experience with repeating firearms, having worked previously for various arms makers, including Smith & Wesson. One of his tasks was to develop a metallic cartridge to replace the inferior self-contained bullets chambered by the Volcanic. Others, including Daniel Wesson, were also working on this problem, and Wesson's .22 rimfire cartridge may have influenced Henry's efforts. By 1860, Henry had developed a .44 rimfire, and he then turned his efforts to modifying the Volcanic to load, fire, and extract his new cartridge. His subsequent patent for these improvements was assigned to the New Haven Arms Co. The firm abandoned its pistol line and concentrated its efforts on the manufacture of lever-action rifles of Henry's design which also bore his name.

Winchester repeaters also found favor with miners, homesteaders, ranchers, lawmen, and highwaymen. Winchester's success continued with the centerfire Model 1873 and 1876 lever-action repeaters, both of which were available in a range of calibers and optional features. The Model 1886 was a milestone for the company in two respects: it marked the first association between Winchester and designer John Browning, and it was also the first lever-action rifle capable of chambering big-game calibers, including the .50-110 Express cartridge. Other Browning-designed Winchesters include the Model 1885 single-shot rifle, Model 1887 lever-action shotgun, Model 1890 slide-action rifle, Model 1893, Model 1894, and Model 1895 lever-action rifles. The Model 1894 alone accounted for over five million sales and is still in production. Winchester was able to enter the military market in later years, with sales both to foreign governments and to the U.S. Army. During both World Wars, Winchester-manufactured rifles and shotguns served U.S. and Allied troops in various parts of the globe. In addition to contract production of the U.S. Model 1917 bolt-action and the famous M1 Garand semi-automatic rifles, Winchester also produced the Model 1897 and Model 12 slide-action shotguns, as well as the M1 Carbine.