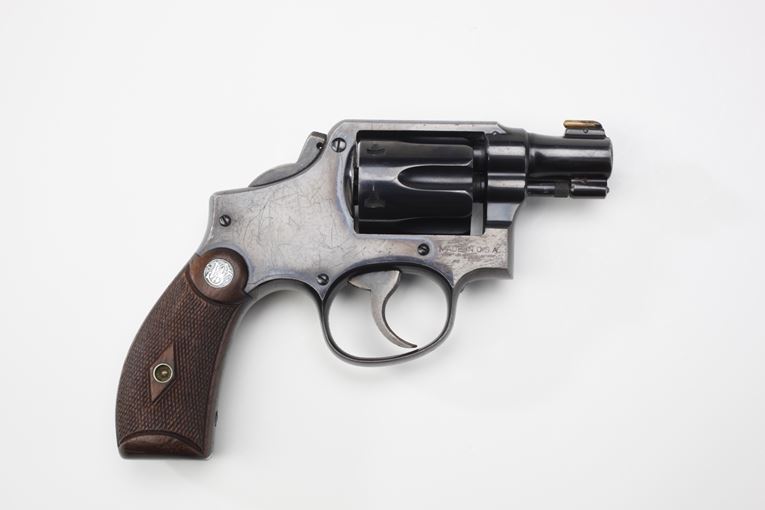 SN 608894. Stumpy, barrel-shaped, 5-foot 5 and a sign painter by vocation, Ed McGivern probably wouldn't be your first pick as "the fastest gun in the world." But he was just that in the period between the two World Wars, traveling across America demonstrating his "fast and fancy" style of shooting with one and two handguns. McGivern, born in 1874 and fascinated by guns from an early age, taught himself to shoot.

Although he at first used semi-automatic pistols he soon found he could achieve a faster rate of fire with a factory standard double-action revolver. Ultra-skilled muscles and reflexes proved speedier than recoil operated mechanisms. As an exhibition shooter McGivern specialized in hitting aerial targets and in hitting two targets- with two revolvers- simultaneously. As his shooting career progressed, so did the complexity of McGivern's act.

As the number of targets grew, so did the need for rapidity of fire, a challenge to which he devoted most of his adult life: just how fast and how straight could a man shoot a handgun? McGivern's crowning shooting feat as recorded in "The Guiness Book of World Records" took place when he was 58 years old and on tour. Of it, the book says: "The greatest rapid fire feat. Ed McGivern fired two times from 15 feet five shots Which could be covered by a half-dollar piece in 45/100's of a second, August 20, 1932."