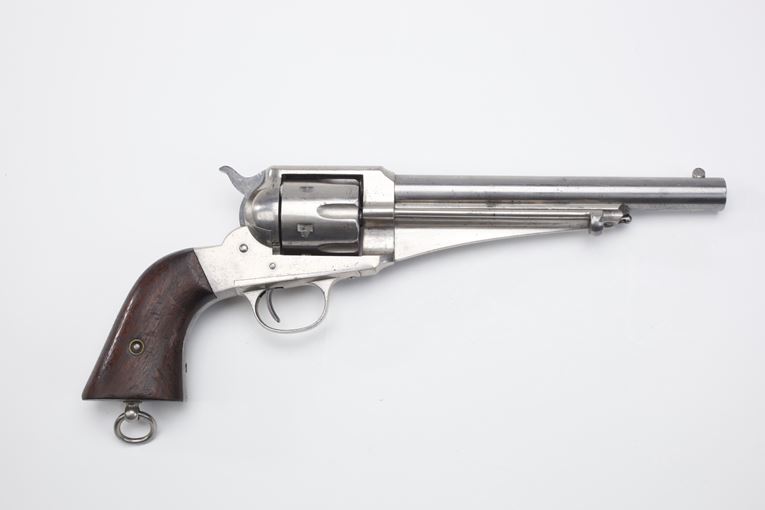 Introduced to compete with Colt's Single Action Army revolvers, this Remington design failed to meet with the commercial success enjoyed by Colt's model due to the Hartford firm's two-year head start in production and sales. S/N 13214


Also known as the "Improved Army" or "Frontier Army" revolver, this single-action was a competitor to Colt's popular Single Action Army line. By the time of its introduction, however, Colt had already secured contracts with the U.S. Army, and Remington was forced to seek other markets. The U.S. government purchased fewer than 650 for use by Indian police, and another 1000 were sold to the Mexican government circa 1880. The Egyptian government contracted for delivery of 10,000, but few were produced and delivered due to significant unpaid debts owed by the Egyptians for Rolling Block rifles.

Between 25,000 and 30,000 were manufactured during the years 1875-1889 in three different chamberings: .44 Remington Centerfire; .44-40; and .45 caliber. These were not optional; rather, the caliber of production models was determined by their date of manufacture. .45 caliber cylinders were slightly longer to prevent accidental insertion into a .44 frame. Standard features included a fluted cylinder, walnut grip panels, blued or nickel-plated finish with case-hardened hammer and loading gate, and a lanyard ring. Standard barrel length was 7-1/2 inches, although a very few revolvers were produced with 5-3/4 inch barrels.