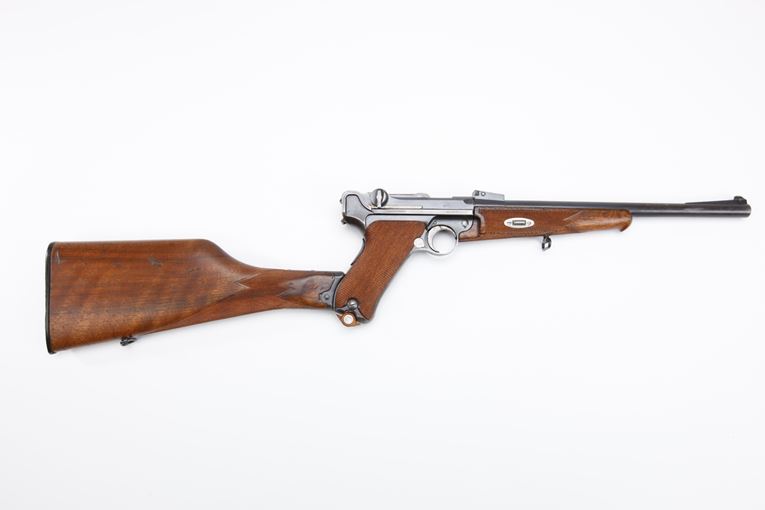 The Luger or Parabellum pistol is perhaps one of the most recognizable semi-automatics in history. A veteran of two world wars, these workhorses served on land, sea, and air, and were a prized war trophy for returning Doughboys and G.I.s. In addition to German Imperial and Nazi military models, Lugers were also manufactured for police and civilian sales, and many were also produced under contract for other nations in Europe, the Americas, and the Middle East. Post-war versions were also manufactured by German firms Mauser and Erma, and by Mitchell Arms and Stoeger.

The Luger was originally developed by Georg Luger, an engineer employed by Berlin armsmaker Ludwig Loewe & Co. Luger also acted as a representative for the firm, which produced both rifles and handguns, including Hugo Borchardt's toggle-action semi-auto pistol. As with the Parabellum, the Borchardt was very distinctive in appearance, with its rear overhanging recoil spring and straight buttstock.

This 1894 design, advanced for its time, was the first commercially successful auto-loading pistol, as well as the first to employ a detachable buttstock magazine. Its toggle action was also a first, and arguably the best feature of the Borchardt. Unfortunately, the pistol's grip was unnatural, the recoil spring complicated and temperamental, and stripping and reassembly was an extremely complicated process. Although Borchardt himself saw no reason to alter his design, Georg Luger quickly grasped the need to improve on some of the gun's less desirable features while retaining its better attributes.

Originally termed the Parabellum-Pistole, System Borchardt-Luger, the first patent for this gun was issued in Britain in 1900. Georg Luger's design included Borchardt's rising toggle action and detachable magazine, but employed an improved spring, extractor, and safety mechanisms, 4-inch barrel, and forward-raked butt. This original design was later improved upon as well.

Beginning in 1902, a carbine version with a 6-inch barrel, wood fore end and detachable wood stock was introduced. Still, Luger's attempts to gain acceptance with Germany's military met with resistance, due in large part to its small 7.65mm cartridge.

Beginning in 1904, Lugers were also produced in 9mm Parabellum caliber, and acceptance by the German Navy followed. These pistols also employed a coiled mainspring instead of the leaf spring featured on earlier models, a round-topped bolt, and a change in toggle design that allowed it to be lifted rather than pulled rearward. The commercial M06 Luger included a rearward-operating safety lever, and a breech stop that held the action open after the last round in the magazine had been fired. The P08 is undoubtedly the most famous of all Luger pistols. They became the standard German military sidearm in 1908, a distinction they held until the adoption of the Walther P38 prior to the Second World War.

Under the Treaty of Versailles, Germany's military was severely restricted in size, and armament production was limited as well to 1000 guns per year. Many German arms were confiscated and destroyed or re-issued by the Allies to friendly nations. While the P08 remained the sidearm of the Reichswehr and Germany's police forces, many surviving Lugers were remanufactured to 7.65mm models, and most new production examples were intended for export. The Vickers Co. of Birmingham, England also produced P08 pistols during this period, as did the Swiss firm Waffenfabrik Bern.

While known in Europe as the Parabellum, the term "Luger" became commonplace in the 1920s, when many P08s were produced for sale in the United States. The Luger name was recognizable among American veterans of the Great War, and New York City importer A. F. Stoeger patented the name as an aid to sales in the U.S. Luger pistols also had a pre-war connection to the United States. A very few M06 pistols were produced in .45 ACP caliber for testing and evaluation by the U.S. Army in 1907. This design was not adopted, and only three of these rare guns are known to exist today. Other Lugers were produced for U.S. commercial sales prior to the First World War. These guns, termed "American Eagle", bore the U.S. eagle crest on their receiver tops. Although manufacture of arms was limited in Weimar Germany, some clandestine production took place in violation of the Armistice.

After Adolf Hitler's rise to power in 1933, German rearmament began in earnest. The Mauser Werke factory in Oberndorf took over the manufacture of the P08 in 1934, with additional examples produced for the Luftwaffe by Heinrich Krieghoff Waffenfabrik of Suhl.

During the interwar years, machinery from the armory at Erfurt had been acquired by Jewish-owned Simson & Co. for use in foreign P08 production. This equipment was confiscated by the Nazis and sold to Krieghoff. Initial production arms were stamped with manufacturer's names and , but, citing security concerns, arms produced after 1938 bore only a code to identify maker and year of manufacture.

After the initial needs of Germany's remilitarization had been met, production reverted exclusively to Mauser until P08 production was discontinued in 1943. Limited production was undertaken by both Mauser and Kreighoff immediately after the war, when a few hundred guns were manufactured under Allied supervision. These guns were intended as presentation models. Production resumed in the 1970s, with the introduction of the Mauser/Interarms P08. These examples differ slightly from the original German-manufactured pistols, and are actually patterned after the Waffenfabrik Bern Lugers.

More recently, both Stoeger and Mitchell Arms have produced stainless steel versions. Although not as widely produced in either original runs or as reissues as other military pistols such as the M1911, the Luger has achieved legendary status, and these guns have gained a dedicated following among both shooters and collectors.