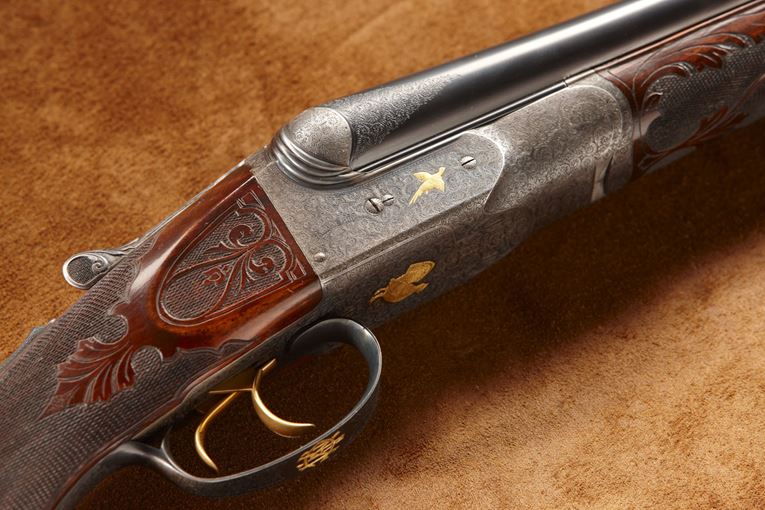 This rare fully engraved and inlaid 16-gauge double is one of only three guns produced to bear the "Invincible" title.

Another series of design changes occurred in the early years of the 20th century, when James Hayes patented a revised cocking system that greatly reduced the number of parts used. The addition of a single trigger, a ventilated rib, and a beavertail fore end, all took place during the 1920s, virtually completing the evolutionary process of the Parker.

Parker Brothers remained in business from 1867 until 1934, when the firm was acquired by the Remington Arms Co. Parker shotguns continued to be manufactured in Meriden until 1938, when production moved to Remington's Ilion, New York facilities. Both the Parker name and line were discontinued in 1942. Nearly 243,000 guns were produced during this period. Parker Brothers shotguns are well-known for their quality and craftsmanship, as well as for their fine appointments, including engraving and checkering. Noted engraver Gustave Young is known to have embellished some Parker guns. Although many Parkers featured external hammers and Damascus barrels, hammerless models with modern steel barrels command the highest prices among collectors. These fine guns are also found with a variety of barrel and stock lengths, styles, and chokes, markings, lever placement, locking systems, and other features. The Parker Brothers reputation, as well as their rarity, make these sporting arms much sought after among collectors, shooters, and enthusiasts.